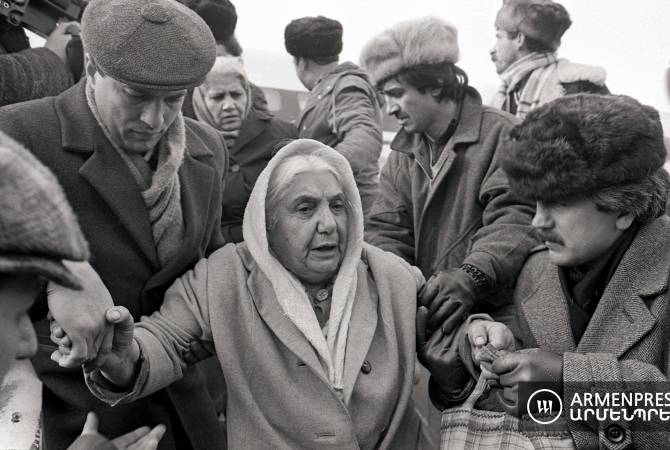 
YEREVAN, JANUARY 21, ARMENPRESS. Article dedicated to the 30th anniversary of the Armenian massacres in Baku has been published in the Italian newspaper La Verità, titled “The Armenian Massacre Hidden by Azerbaijan”.

Armenpress presents the translation of the article:

“30 years ago from January 13 to 19 massacre and deportation of Armenians were carried out in Baku exclusively for ethnic identity.

30 have already passed but Azerbaijan continues hiding the truth. 30 years ago massacre and deportation of Armenians living in Baku were organized and carried out in the Azerbaijani capital from January 13 to 19, 1990, solely for their ethnic identity. The massacres were organized by the Azerbaijani Popular Front Party, but the authorities were sponsoring them. Although after the 1988 Armenian massacres in the Azerbaijani city of Sumgait the Armenians in Baku had to migrate due to the persecutions and violence launched against them, nearly 40.000 Armenians, mainly elderly people, single, ill or those in need, were still living in Baku in early 1990.

Due to hiding the facts and not voicing them it was impossible to count the exact number of Armenians who were killed and died in the Baku massacres. According to the data of some international human rights organizations, more than 450 people were killed for their ethnic identity. The whole property of thousands of Armenians living in Baku has been robbed and confiscated. It’s worth noting that according to some eyewitness reports, Jews, Russians and other foreign citizens were also killed in these violence acts only because of looking like Armenians. All Armenians who survived these atrocities migrated from Baku under a direct threat of physical extermination, settling in different countries of the world.

Overall, Armenians in Baku were subject to massacres at least three times in 1905, 1918 and 1990. In a city, where there has always been an Armenian presence, nearly 300.000 Armenians were living in late 1980s. Although Armenians have never been a majority in Baku in terms of percentage of the population, but from the very start they held high positions, conducted active construction-engineering and commercial activities, especially in the oil industry. The first industrial oil well in Baku (started operating in 1869) belonged to ethnic Armenian I. Mirzoyev (Mirzoyan). There have been many Armenian educational-cultural centers in Baku which stopped operating in the early 1980s.

The European Parliament condemned the massacres committed against Armenians in its resolutions adopted in 1988, 1990 and 1991.

Frelick Bill, chair of US Committee for Refugees, recorded and talked about these facts in 2002.

On July 27, 1990, an open letter has been published in The New York Times addressed to the international community. The latter was signed by 133 prominent scientists and human right advocates of Europe, Canada and the USA which were voicing their complaints on the killings and massacres of Armenians in Baku.

Azerbaijan is mourning January 20 (Black January) in memory of Azerbaijanis killed during the clashes with the Soviet troops. Official Baku presents these events as a result of provocations “made by Armenians” by trying to hide the large-scale crimes committed before January 20 which are recorded not only in the memories of Armenians who survived these massacres, but also in the documentary materials of international press.

Contrary to the facts recorded by international human right organizations, the Azerbaijani authorities till now are hiding their genocidal actions and distort the realities to avoid responsibility. The Azerbaijani authorities not only distort the essence of the “black January”, but also silence and forget about the story of “the capital of three massacres”, by trying to make forgotten the consequences of the policy of ethnic cleansing, deportation and massacres committed against Armenians in 1905, 1918 and 1990 in Baku.

The current Armenophobic policy conducted by Azerbaijan at state level is a result of not giving a proper legal response to the crimes committed and leaving them unpunished. The victims of that policy are not only Azerbaijani Armenians and the population of the Republic of Artsakh (Nagorno Karabakh), but also all Armenians worldwide.

An active stage of manifestation of Armenophobia in the Azerbaijani society was also recorded in April 2016 - during the large-scale attack on Artsakh by Azerbaijan which was accompanied with brutal killings, beheadings of civilians and military servicemen, tortures of captive soldiers, and a number of other cases of war crimes”.