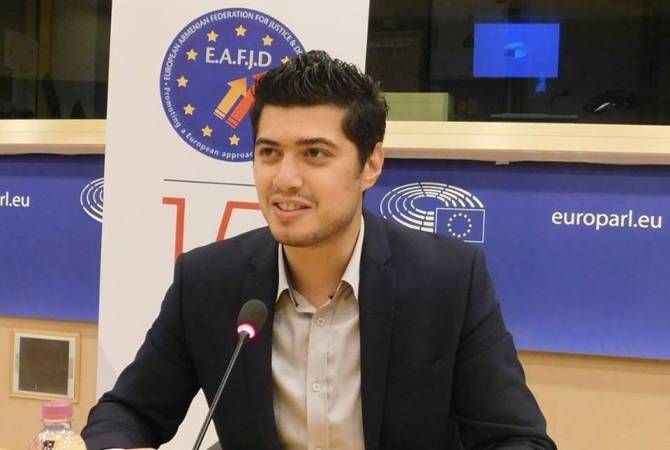 
BRUSSELS, JANUARY 17, ARMENPRESS. The Azerbaijani media again spread disinformation, this time distorting the content of the European Parliament’s report on the implementation of the Common Security and Defense Policy.

Harout Chirinian – Communication and PR Officer at the European Armenian Federation for Justice and Democracy (EAFJD), gave an interview to ARMENPRESS on the topic.

-Mr. Chirinian, what was the emphasis of the EP report and whether it has a reference to Karabakh as some Azerbaijani media outlets mention in their reports?

-The reports according to which the EP report contains the term “occupation of Nagorno Karabakh” are false. The article spreads disinformation, this is an Azerbaijani state propaganda. The truth is that the European Parliament debated and voted on three different reports: the annual report on “the implementation of the Common Foreign and Security Policy”, the report on “Implementation of the Common Security and Defense Policy” and a general report on Human rights. None of these resolutions, including the first one that the Azerbaijani media make reference to, mentions Nagorno Karabakh or presents it as an “occupied territory”. Actually, there’s no reference to Artsakh at all. Among other things, the first report speaks about the conflicts in the Eastern Partnership countries in general. While it is true that the first report states that the EU is committed to the territorial integrity of the Eastern partnership countries, it has to be made clear that this report makes also direct reference in its preamble to the “European Parliaments recommendations of 15 November 2017 to the Council, Commission and the EEAS on the Eastern Partnership”. The latter contains the right for self-determination as one of the three OSCE Minsk Group basic principles and expresses EU’s full support for the OSCE Minsk Group when mentioning the Nagorno Karabakh conflict. This reference is also done for the second report as well. The Azerbaijani media clearly did not want to mention this.

-In your opinion, whom the messages in the resolution were addressed to?

-It’s obvious that the European Parliament’s target is Russia, and these same reports involve a call on Russia to fulfill its international commitments, but they never mention Artsakh or Azerbaijan. Moreover, one of these resolutions reiterates the European Parliament’s vision that “current conflicts in all Eastern Partnership countries should be settled in accordance with norms and principles of international law”. This means that in the case of Nagorno Karabakh, the OSCE Minsk Group basic principles and OSCE 1975 Helsinki Final Act are valid, namely also the right for self-determination of the people of Artsakh.

-What can be done by the European Union in order to contribute to the peaceful resolution of the conflict?

- As you know the European Union isn’t involved directly in the mediation process, but the EU has regularly expressed its support for the OSCE Minsk Group and its three basic principles. The Nagorno Karabakh conflict is a security and human rights issue. And one of the goals of the advocacy work of the EAFJD is to raise awareness in Europe about the state policy of hate speech and Armenophobia in Azerbaijan. This was the reason why we organized a conference on Armenophobia in the European parliament in March 2019. For the first time this topic had been a focus of discussion in the European parliament.

One of the conclusions of the panel was that massacres against Armenians of Baku, Soumgaït, Kirovabad and Maragha, were the tragic results of Armenophobia in Azerbaijan. Unfortunately, the Azerbaijani authorities still incite anti-Armenian sentiment in their society, which is a form of Xenophobia and it must be condemned by the EU. This is one way the European Union can contribute to the peaceful resolution of the conflict.

We are convinced that Artsakh can never be part of Azerbaijan since it would mean an existentialist danger for the people of Artsakh. This is what history has taught us. The international community must now respect Artsakh’s will to be independent.

Speaking about the anti-Armenian pogroms of Baku, I would like to inform that we will be organizing a conference on the issue in the European Parliament very soon.