Impunity leads to new crimes: international response and condemnation of Baku pogroms in 1990 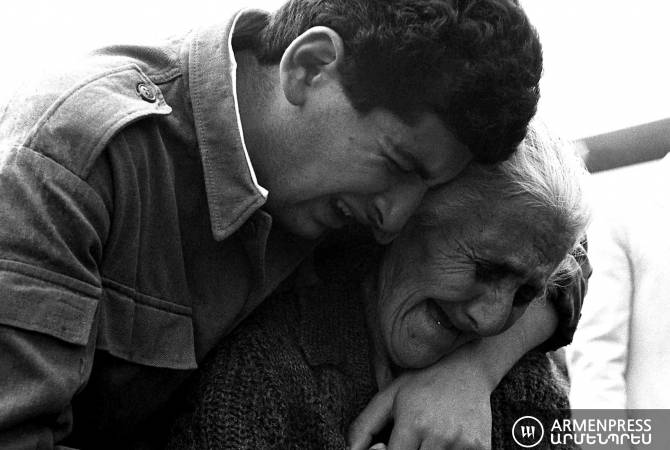 
YEREVAN, JANUARY 14, ARMENPRESS. From 1988 the third wave of pogroms against Armenians (after 1905 and 1918 Armenian pogroms) broke out in Baku. In just two years the Armenian community of Baku and surrounding towns, of about 250 thousand in number, was forcibly deported. As of January 1990, approximately 30 thousand Armenians were left in the city. Most of them were old, lonely or sick and either didn’t want to or just couldn’t flee from Baku. The wave of hatred against Armenians started from the beginning of 1990.The new wave of massacres of the Armenian population reached its culmination on January 13-19, 1990. The number of people killed during the pogroms and in the aftermath, as a result of traumas and diseases, is up to 500 people. The exact number of victims of the pogroms remains unknown till now.

Azerbaijan has not yet evaluated the pogroms from its political and legal aspects which has led to other racist and xenophobic acts by Azerbaijani authorities and strengthened Armenophobia in the country. Under International law, the brutal crimes committed by the authorities of Soviet Azerbaijan and the Azerbaijani Popular Front opposition movement against the Armenian population fall under the classification of crimes against humanity. It is evidenced by numerous corroborations and resolutions of international organizations that have condemned these crimes.

The pogroms of Armenians in Baku were publicly denounced by American congressmen, the European Parliament and other international organizations.

On January 18, 1990, a group of US senators sent a letter to Mikhail Gorbachev expressing concern about the pogroms of Armenians in Baku. In February, 2002, Bill Frelick, the head of the U.S. Refugee Admissions Program, presented a report in the Justice Committee of the U.S. Congress, stating that in December of 2002, 2000 ethnic Armenians deported from Baku lived in Moscow, saying “they were evacuated from Baku following the anti-Armenian pogroms in January 1990…”.

House Foreign Affairs Committee Chairman Ed Royce was joined by fellow Committee colleague Brad Sherman and Representatives Tony Cardenas, Anna Eshoo and Katherine Clark in condemnation of the Azerbaijani pogroms against the Armenian population of Baku, Kirovabad and Sumgait in March, 2014. Brad Sherman stated: “The Sumgait Pogroms were the beginning of an escalation of violence against the Armenian minority, with a wave of anti-Armenian violence spreading to Kirovabad in November 1988 and Baku in January 1990, which culminated in the forcible expulsion of 390,000 Armenians from Azerbaijan and the 1991-94 war over Artsakh (the former Nagorno Karabakh)”.

In 2011, 2013, 2014 and 2015, a number of U.S. Congressmen including Adam Schiff and David Cicilline offered strong condemnations of the Azerbaijani massacres in Sumgait, Baku and Kirovabad. In his statement Senator Gary Peters notes: “The massacres of Armenians did not stop in Sumgait but were followed in other Azerbaijani towns such as Kirovabad in November 1988 and the capital Baku in January 1990”.

On January 18, 1990, the European Parliament adopted a resolution on the situation in Armenia, calling on the European Council and the European Commission to stand up for the Armenians before the government of the USSR. The EP called on the Commission and Council to make representations to the Soviet authorities with a view to ensuring that they order “full and immediate lifting of the blockade imposed on Armenia and Nagorno-Karabakh” and “the circumstances surrounding the pogroms perpetrated against the Armenians, in particular in Sumgait and Kirovabad, Azerbaijan, are brought fully to light”.

The resolution of the European Parliament of March 14, 1991, stated that “the 300 thousand Armenians who have fled from Azerbaijan (Baku and Sumgait massacres) to Armenia are in a state of complete destitution and require urgent aid”. These crimes, due to their significance and great public danger, are also subject to the International criminal court in The Hague. The international community must give a proper political and legal assessment to the Armenian pogroms, thus, expressing the essence of the concept of “punishment”, in order to prevent such crimes from happening in the future. The organizers and perpetrators of the pogroms have not yet been brought to justice, thus unleashing the hands of the regime in Baku, which is ready to repeat such crimes. Azerbaijan continues to pursue discriminatory and xenophobic policies which were reflected in 2004, during the training courses organized by NATO in Hungary when Armenian officer Gurgen Margaryan was axed, while asleep, by his fellow participant, Azerbaijani Lieutenant Ramil Safarov who is currently considered as hero in Azerbaijan, as well as in the case of torture and brutal murder of civilians in Talish village in April, 2016.

21:29, 09.24.2021
Viewed 1733 times Today, no Armenian lives or practically could live in the territories under the control of Azerbaijan – Pashinyan