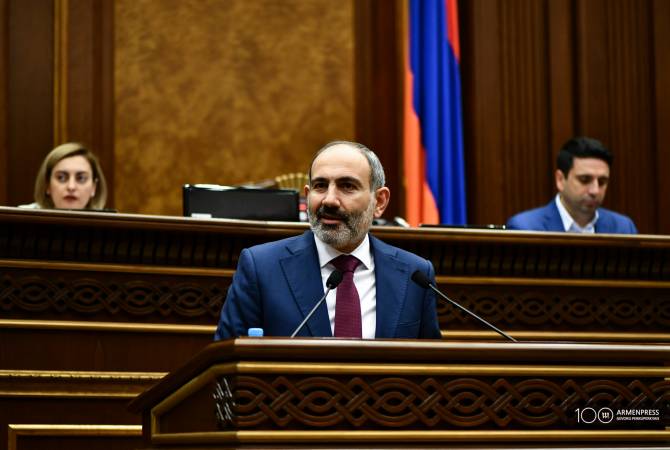 The only hope of the former corrupt regime is pinned on Hrayr Tovmasyan and the Constitutional Court. But we will not allow it and we will take another action and today we have come together to launch that action. Today, we must make a decision to resolve this issue with the people, and the National Assembly must decide to hold a national referendum on amending Article 213 of the Constitution.

The amendment of this article should terminate the powers of all members of the Constitutional Court elected in the old manner. This will happen if the citizens of the Republic of Armenia go to the polling station on the day of the referendum and say yes to the proposed changes and to the people’s authority. In that case, two newly appointed judges will continue to serve in the Constitutional Court: Arman Dilanyan nominated by the General Assembly of judges and elected by the National Assembly and Vahe Grigoryan nominated by the President and elected by the National Assembly.

Honorable Presidency of the National Assembly,
Dear MPs,
Proud Citizens of the Republic of Armenia,

And in the National Assembly and outside its borders there will be many views, discussions, speculations on the decision to hold a referendum. All necessary legal justifications are available in the draft package. I do not want to go into small or big details and I can record the most important from this high podium.

And I want to say that all those people who may try to set legal or other obstacles to the free expression of our people’s will shall be adequately rebuffed as anti-democratic and anti-state forces. And those who accept the supreme authority of the people will become devotees of shaping the future of Armenia.

Dear compatriots, I would like to address the members of the Constitutional Court with a few words.

Dear Members of the Constitutional Court.

I understand that what I said in this talk is not pleasing for many of you; you may deem some of the episodes offensive. But I mean, I do not tend to offend anyone, I just have to call things by their own name. To say more, if anyone in any part of my speech saw some kind of offence, I apologize. But the realities do not change.

Yes, there is a crisis around the Constitutional Court that contains the threat of becoming a broader crisis, but I want to say that you can solve that crisis yourself, by doing great service to the state and the people, by providing a valuable service.

You, the ones elected under the old procedure, can resign as a member of the Constitutional Court. You can do it today, tomorrow, or you can do it before the President signs the decision on the referendum.

I would also like to say that I am ready to meet with you all, individually, or all of you, to discuss its details. I can ask you to take this step in person, in your own eyes, and I can offer your support in resolving this situation on behalf of the people.

I would like to emphasize that we are ready to invite the leading international observer organizations - the Council of Europe, the OSCE, the European Union, the CIS, etc. - to observe the referendum, and there is no doubt that guarantees for the people’s free will be created just as it was the case with the 2018 free, fair, transparent democratic elections in Armenia, the results of which were not disputed in the Constitutional Court or questioned by any party, social or political group. This is the evidence of one thing: Democracy in Armenia has no alternative. Democracy in Armenia is irreversible.

Therefore,
Long live Freedom,
Long live the Republic of Armenia,
Long live we and our children who live and will live in a free and happy Armenia!”