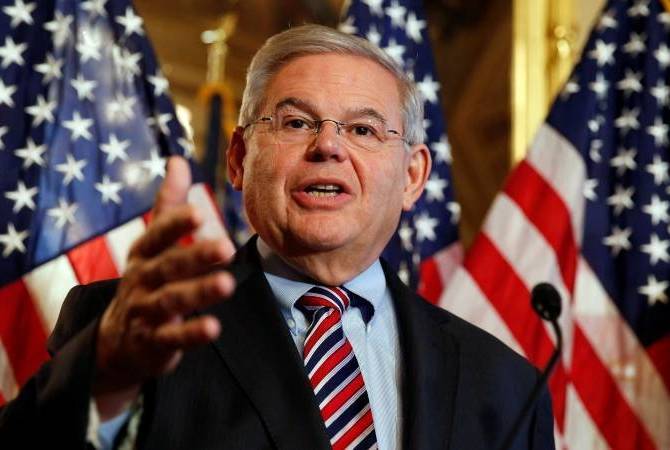 
YEREVAN, NOVEMBER 22, ARMENPRESS. US Senate Foreign Relations Committee Ranking Member Bob Menendez urged his colleagues to follow the example of the House of Representatives to immediately adopt the S.Res.150 on recognizing the Armenian Genocide, Voice of America reported.

“This resolution sets the record straight.  A record that so many US administrations over the years have sought to obscure. These administrations, the Republicans and Democrats, have dug their heads into the sand, despite the words of US diplomats who were there at that time, who saw the Genocide with their own eyes”, the Senator said.

In 1915-1916 in their official letters sent to the Department of State the US diplomats in Turkey described the planned extermination of Armenians, the atrocities and killings of Armenians by the Turkish authorities. The Senator shared the memoir of US Ambassador to Turkey Henry Morgenthau (1913-1916) where he wrote: “I am confident that the whole history of the human race contains no such horrible episode as this. The great massacres and persecutions of the past seem almost insignificant when compared to the sufferings of the Armenian race in 1915”.

The Senator said American officials, those with the credible and legitimate understanding of what took place made these statements. They are part of the historical record. They mark one of the prouder moments in the history of the State Department and our diplomacy. “There are 27 countries in the world that have already recognized the Armenian Genocide. 11 of them are NATO countries and none of them have ended their relationship with Turkey when it relates to recognizing the Armenian Genocide as a historical fact”, Bob Menendez said in his remarks at the Senate. “So why is it that the greatest country on the face of the world incapable of doing the same when so many others already have?”, he added.

Senator Ted Crus expressed support to Menendez resolution. “As America we must never be silent in response to atrocities. Over 100 years ago the world was silent when the Armenian people were suffering and being systematically murdered. We have a moral duty to acknowledge of what happened to 1.5 million innocent souls. It is the right thing to do”, he said.

Compared to the House of Representatives where the president puts the issue for voting, here in the Senate’s case, each of 100 Senators can block the passage of any initiative. And this was done by Senator David Perdue, who said this passage of this Resolution can create difficulties to solve the problematic issues in the US-Turkey relations.

Senator Menendez also spoke after Senate passage of the Resolution was blocked by Republican Senator David Purdue announcing he will relent and will continue his effort on the Senate Floor to expose those who insist on denying the Armenian Genocide.

“There always seems to be some reason why, in fact, it is not a propitious moment [to recognize the Armenian Genocide]. You know, it’s like a rope-a-dope. There’s always another reason, always another excuse… If 11 NATO allies have done this, and they are still in NATO and they are still working with Turkey and still have diplomatic relationships with Turkey—it is amazing that the greatest superpower on the face of the earth just can’t speak the truth of history,” added Menendez. “Now, I’ve been here in the Senate long enough to know that objections to unanimous consent work both ways. And so, I am going to continue to bring this issue to the Floor. I think Armenian-Americans, the world, and history should record who stands on the side of recognizing genocide for what it is—and who does not.”