Tumanyan the Photographer: Exhibition honoring the great Armenian poet from another perspective 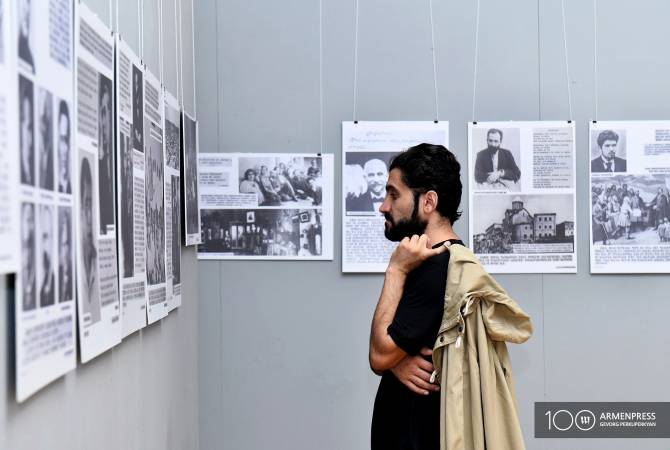 
YEREVAN, SEPTEMBER 11, ARMENPRESS. On the occasion of Hovhannes Tumanyan’s 150th anniversary of birth the “Tumanyan the Photographer” exhibition was opened at the great Armenian poet’s house-museum in Yerevan, which offers visitors the chance to explore the writer’s photography talent.

The exhibition features photos of Tumanyan’s children, photographed by Tumanyan himself. His exclusive photo album collection is also among the exhibition.

The second part of the exhibition is comprised of ARMENPRESS news agency’s exclusive archive materials dedicated to Tumanyan’s 150th anniversary of birth.

The exhibition was opened today as part of the First Armenian Photo Festival.

Hovhannes Tumanyan House-Museum Director Ani Yeghiazaryan highlighted one special photo,  which depicts all members of the Tumanyan family. “This photo was taken in spring of 1914, a fateful year, after which the family members parted for each to carry out their mission. The photo of Tumanyan’s daughter Tamar is also interesting, where she is wearing the same clothes which she wore while visiting her father in the Methekhi prison in 1909. She brought home the “Mi Katil Meghr” and “Vayrejk” poems wrapped inside this dress. Tamar was always proud that she is the savior of her father’s two works”, Yeghiazaryan said.

ARMENPRESS Director Aram Ananyan emphasized in his remarks that the materials are of exclusive archive value.

“Not only have we digitized the films of our archive, but we have also tried to present the exhibition culture of time,” Ananyan said. He said that the exhibits are the unique materials which were also presented during the 100th anniversary exhibition which was again organized by ARMENPRESS.

Ananyan said that they’ve also presented the agency’s work with was done to promote Tumanyan.

“We have a goal to take the exhibition to Dsegh. If succeeded, we will organize a similar exhibition on the 150th anniversary of Komitas and we will hold an exhibition at Tumanyan’s home in Tbilisi where Komitas and Tumanyan frequently met. This will become a unique reunion of the greats in their native cultural home,” Ananyan said.

The exhibition will run until September 20.