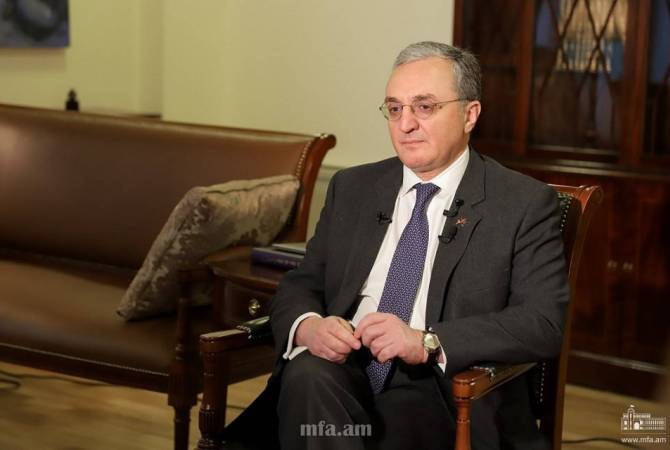 
YEREVAN, JULY 31, ARMENPRESS. The question of the Armenia-EU Comprehensive and Enhanced Partnership Agreement (CEPA) fully entering into force is rather more a technical one because it is practically in force, Armenian Foreign Minister Zohrab Mnatsakanyan said in an interview to German Marshall Fund Senior Fellow Jonathan Katz.

“This important agreement enhances a growing political and economic dialogue and partnership with the EU. The question of the CEPA fully entering into force is rather more a technical one because it is practically in force. Why? Because we already have a mechanism, a provisional application. Armenia ratified it; the European Parliament ratified it; now it takes 28 EU countries to ratify it and each of them has their own method. Eighteen EU members have already ratified it. So, currently there are still 10 to do so and they’re going to, there is no political impediment to that. It’s just a domestic procedure. In fact, we already have 80 percent of all the provisions in the implementation phase. We have coordinated and agreed to the roadmap for implementation and the implementation is underway”, the FM said.

The minister said the CEPA is a new legal foundation on which Armenia continues doing what it does and takes further steps in that direction to benefit Armenians.

“The CEPA is a document that contains a political part, a justice and freedoms part, and a broad sectoral part. It is a comprehensive agreement that includes transport, energy, environment, trade and economy, culture, education, etc. It provides for regulatory approximation between Armenia and the EU and enhanced trade and investment. Therefore, the CEPA is an instrument for us to further upgrade our regulations on norms or standards, which can contribute to an essential framework for the development of our nation”, he said.

Armenia and the European Union signed the CEPA in Brussels on November 24, 2017.