UEFA U19 to be kicked off with Armenia vs. Spain in Yerevan | ARMENPRESS Armenian News Agency

UEFA U19 to be kicked off with Armenia vs. Spain in Yerevan 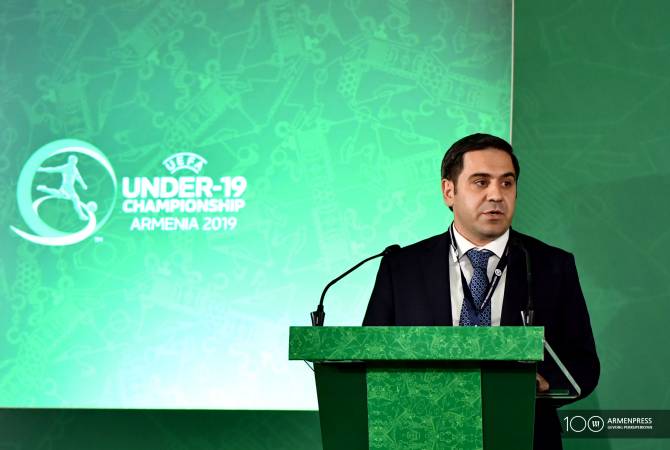 
YEREVAN, MAY 31, ARMENPRESS. As the draws of the UEFA U19 revealed competitors, First Vice President of the Armenian Football Federation Armen Melikbekyan said Yerevan is ready to host the event. The U19 championship will kick off July 14th in the Armenian capital.

“The draws were very meaningful for us because the inaugural match of the Euro 2019 U19 will be held between Armenia and Spain,” he said.

“We certainly understand what Spain represents as a team, and it has players who attempt to try themselves in La Liga. However, every result is possible at the opening match,” he said.

According to Melikbekyan, the strongest team in the A group, which also includes Armenia, is reigning champion Portugal.

He said Armenia will continue studying rivals until the kick off in order to determine its starting lineup.

“We hope that our team will deliver a worthy performance and it is a lot better to play with such strong competitors,” Melikbekyan said.

He said a special fan-zone will be opened in Yerevan ahead of the championship.

According to the draw results, the following two groups were formed: