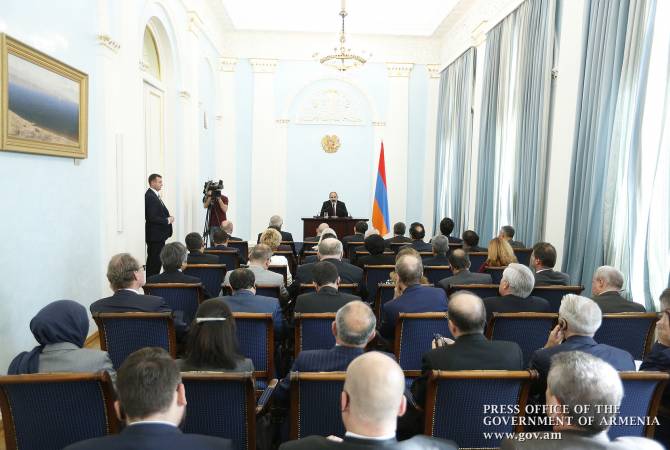 Greeting the foreign diplomats, the Premier said he was pleased with the opportunity to hold such a meeting. Nikol Pashinyan pointed out that a year after the formation of his government, he deemed it expedient to impart the past one year’s results, problems and challenges with our international partners.

Presenting his assessment of the government’s year-long efforts, Nikol Pashinyan first referred to economic challenges, dwelling on the solutions and the results recorded so far.

“The first problem we had in terms of economics was to maintain macroeconomic stability. Not without some difficulty, we were able to solve this problem because in September last year, just three months after the revolution, we approached the threshold of recession and the economic situation could be strained. But we managed to overcome these negative trends, and we had a 7.1% gross domestic product growth in the first quarter of this year.

I must say that although this growth is pleasing to us, we understand that the statistics is a little bit lower for the proposed economic revolution. At least we should try to increase the rate of growth by 2-3%. As an exciting trend in the economy, I would highlight the reduction of the black economy. In fact, 51,000 new jobs appeared in Armenia over the past one year. These are the jobs that employers themselves declared to tax authorities, that is, they are not the result of an analysis, as often our political rivals try to present themselves, but specific figures stated by business entities that have led to fiscal liabilities.

Our estimation is that 1/5 of these 51,000 jobs were generated during the past year. This makes some 10,000 jobs, which I think is not a bad indicator.

The next index that I would like to mention is the over-fulfillment of the State budget revenue target. We have already declared that this year the State budget receipts will boast a bump of 62 billion drams, which makes USD 130 million. And here, too, as I first stated it, our opponents reacted that not until by the end of year we could see whether this was true or not.

But I would like to say that we actually made a little cunning: we already have that amount as a matter of fact. And there is no doubt that the State budget surplus will be much bigger by the end of this year.

Trade is the next indicator that I would like to mention. 84 million more cash-register receipts have been recorded in our country since last May, which means that more transactions have been made out of shade, which accounts for the bulk of our extra budgetary revenues.

Foreign investment is the biggest challenge we are facing today in the economy. We do our best to make our country more attractive for foreign investment. But there is also conviction and understanding that without a truly independent judiciary we will not be able to address this problem because any investor wants to safeguard his or her investment, and such guarantees can only be provided by a truly independent judicial system,” the Head of Government said.

Coming to his political achievements, Prime Minister Pashinyan singled out 2 main results. “The first is that we have been able to ensure stability and normal democratic developments in our country and, ultimately, we held extraordinary parliamentary elections that were assessed by the international community as free, fair, democratic, and transparent.

This was unprecedented at least in terms of parliamentary elections. As regards the parliamentary elections, I can say that I myself hoped that the number of political forces represented in Parliament would be much greater, but people chose the way they chose, and I think that today the political palette is represented truly there. And we consider that our greatest political achievement is that we were able to hold free, fair and democratic elections.

I repeatedly emphasized in my speeches and articles when I was still an opposition politician that the greatest mission of a democratic government is not only to sweep to power through free and fair elections, but also to leave power through free and fair elections. And in this regard, I think we cannot and will not deviate from this vision because I have repeatedly counted it as my biggest political mission. It is now just a matter of political process and people’s determination,” Nikol Pashinyan said.

According to the Prime Minister, stability was achieved in foreign policy, too. “Our relations continue to be of strategic nature with the Russian Federation, we are a member and the presiding country in the Eurasian Economic Union. We succeeded in finding specific solutions within the Collective Security Treaty Organization, and I believe that our relations in the CSTO and the Russian Federation are developing normally.

We managed to develop our relations with the European Union as well. We are at the final stage of the roadmap to the Comprehensive and Enhanced Partnership Agreement, which will be finalized in the coming weeks and we will be working in that direction.

During this time, the Francophonie Summit was held in Armenia, which was a true success for both the Republic of Armenia and our government. I paid an official visit to the Federal Republic of Germany. I was in France on a working visit and, of course, in Brussels on several occasions - in the Council of Europe.

I think that a good atmosphere has been shaped to develop our future relationships in the Eurasian continent.

We are developing active relationships with other partners: we work very closely with the United Arab Emirates, India and our European partners, and we are convinced that this constructive atmosphere will be maintained.”

Prime Minister Pashinyan next referred to the situation in the judiciary, highlighting the imperative of reforms to be carried out in that field and the importance of cooperation with international partners.

“Indeed, the judicial system is our biggest problem today. You know that specific events have taken place recently and are still happening. The political bottleneck that faced the government during the past year, and I personally encountered the same reality that our public opinion, our society holds the government responsible for all irregular judicial decisions.

Although I have repeatedly made it clear that I am not involved in judicial processes and have no desire to do so, society keeps putting the blame on the government for all judicial decisions, considering that the court rulings comply with the Prime Minister’s personal decisions. This is a very complex inertia inherited from the past. At times, the government is forced to simply disassociate itself from such rulings because otherwise it can face a certain crisis of confidence.

And, of course, at this stage, we hope to cooperate closely with our international partners to have a truly independent judiciary in Armenia because I have long been analyzing what is the reason for such an attitude and such a public perception. And it was clear to me that there is some disbalance in the current situation.

I am now Prime Minister for a simple reason that I was first nominated as Prime Minister by the political force which won the absolute majority of the votes. From a political point of view, one particular issue arises, namely who is represented by the judiciary after the revolution and whose power it is exercising in the Republic of Armenia.

I say this because the second and unchangeable article of the Constitution of Armenia states that in the Republic of Armenia, the power belongs to the people. The people shall exercise their power through free elections, referenda, as well as through state and local self-government bodies and officials provided for by the Constitution..

The courts are among those public bodies prescribed by the Constitution, and our Constitution clearly provides that these State institutions should be directly associated with the people, that is, they should have the mandate and authority to act on behalf of the people. And the problem is that, as a matter of fact, we have not had such a situation during last year’s political developments. And due to this, court rulings are causing discontent in our society; the public simply does not have trust in the judicial system and this can become a permanent source of crisis.

I am convinced that the time has come to deal with this problem, but I am also convinced that we cannot reproduce the previous judicial system we had.

I have written about it for many years and have even been condemned by that judicial system and my conviction is that political changes will be absolutely pointless if we do not build a truly independent judicial system, the rulings of which could be accepted as decisions made on behalf of the Republic of Armenia and its people. However, there is no such an atmosphere in the country as of yet. Therefore, considering that the executive power enjoys the people’s trust in Armenia, I feel that the time has come either for the judicial power to enjoy the people’s trust.

In conclusion, the Prime Minister answered the questions asked by the ambassadors in attendance, which bore on the proposed judicial reform, transitional justice, the structural changes within the system of governance, the ongoing public administration reform, etc.