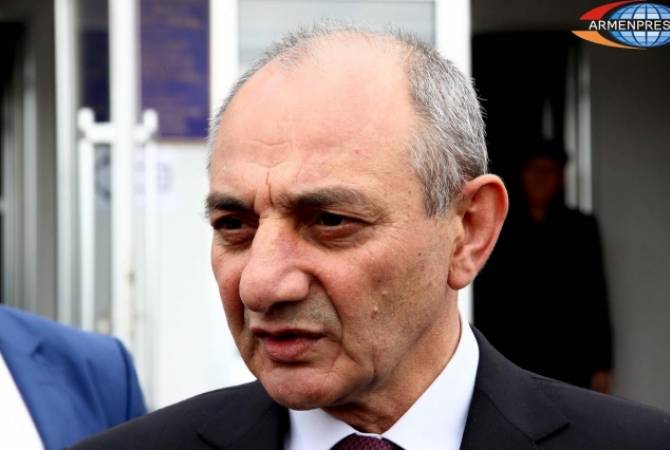 
YEREVAN, MAY 21, ARMENPRESS. The motion to change preventive measure of Robert Kocharyan was not aimed at calling into question Armenia’s judicial system, ARMENPRESS reports President of Artsakh Bako Sahakyan told the reporters at the National Assembly of Armenia. To the remark that his and former President of Artsakh Arkady Ghukasyan’s act caused some domestic political tensions in Armenia, Sahakyan answered,

The reporters also asked Bako Sahakyan to comment on PM Pashinyan’s May 20 announcement, where he said that there are forces that try to instigate disagreements, controversies and even enmity between the people of Artsakh and Armenia.

“If there are such figures or forces, we have to discover them and if there are such goals, I assess it as treason. Anyway, I have no such information that there are people who prepare betrayal “, Bako Sahakyan said.

Armenian Prime Minister Nikol Pashinyan has called upon the people of Artsakh to support solely those powers who are supporting the Armenian people and its legitimate representative government.

Pashinyan made the remarks during a live televised speech on May 20th regarding the judiciary.

“It is obvious that there are concrete powers representing the previous corrupt system who attempt to realize the formula applied by them in the past, that is: incite disagreements, contradictions and even animosity between the people of Artsakh and Armenia, within the logic of Divide and Rule, with the purpose of covering up and justifying corruption crimes committed by them in the past.

Although it is clear for all of us that our compatriots in Artsakh were frequently impacted from the systematic corruption in our country more, certain officials of these systems are utilizing corruption connections to implement a smear campaign in Artsakh against the Government of Armenia and personally the prime minister. Back during the last year’s parliamentary election campaign I said that by analyzing this all, I see under it a long-term goal of up to inciting a conspiracy war, even surrendering certain territories and blaming the Government of Armenia for it,” he said.

He assured that Prime Minister of Republic of Armenia, which is the guarantor of security of Artsakh, as Commander in Chief of the Armed Forces in wartime, he will take the strongest measures to eradicate this conspiracy intentions. According to Pashinyan, it is also high time to create a parliamentary ad hoc committee to study the circumstances of the 2016 April War to give answers to a number of questions.