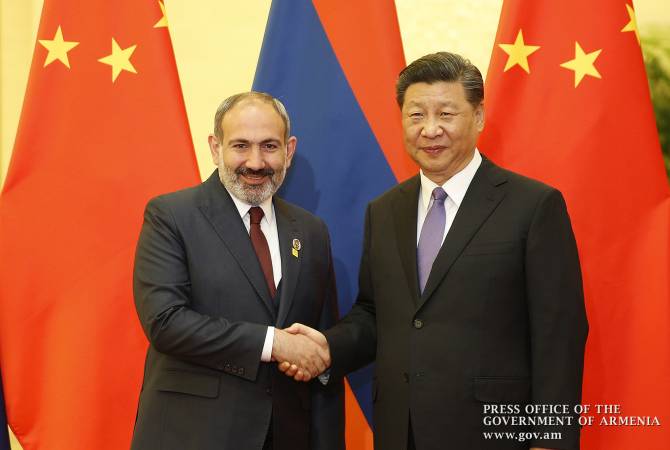 
YEREVAN, MAY 14, ARMENPRESS. Prime Minister of Armenia Nikol Pashinyan, who is in China on a working visit, on May 14 met with Chinese President Xi Jinping at the Great Hall of the People in Beijing, the Armenian PM’s Office told Armenpress.

During the meeting the leaders of the two countries discussed a number of issues of the Armenian-Chinese relations agenda.

The Chinese President said he is happy to welcome PM Pashinyan and thanked for accepting the invitation to take part in the Conference on Dialogue of Asian Civilizations. Xi Jinping said China attaches importance to the constant development of relations with Armenia in various areas. He talked about the Armenian-Chinese firm cultural and historical relations, adding that it is also the result of the Silk Road. “We know the Armenian people very well, we know the names of Aram Khachaturian, Artem Mikoyan, Hovhannes Tumanyan. We are united with the general goals of cooperation of civilizations. We are well aware of the key historical events of Armenia. We are confident that the tragic events which happened to the Armenian people should be ruled out in the future”, Xi Jinping said.

He said China is ready to take part in the construction works of North-South highway and implementation of other infrastructure projects.

President Xi said in the recent period certain Armenian products have been successfully presented at exhibitions held in China and are also presented in the market. The Chinese President expressed confidence that the bilateral cooperation will further develop in commercial, industrial, transport, cultural and humanitarian fields. He added that China will also provide support to the projects which will contribute to Armenia’s development and raising the welfare of the Armenian people.

In his turn the Armenian PM thanked the Chinese President for the invitation to the Conference and the meeting opportunity which is a good chance to discuss the bilateral cooperation prospects. “The relations with China are among Armenia’s foreign policy priorities. Our two peoples represent old civilizations, there are descriptions in the Armenian manuscripts about the ties of the two peoples in the 5th century. These ties have been of commercial, humanitarian and political nature. For us the constructive and productive relations with China are very important”, Nikol Pashinyan said.

PM Pashinyan said Armenia is interested in implementing joint projects with China on the sidelines of One Belt, One Road initiative and added that the Armenian side considers participation in it through the implementation of joint programs in transportation, railway, information infrastructures.

Pashinyan introduced the Chinese President on the recent events in Armenia and stated that today Armenia is a dynamically developing country with political stability and predictability.

The leaders of the two countries also exchanged views on international and regional issues.

The sides agreed to discuss the future cooperation steps at the agencies level.

The leaders also discussed the Karabakh conflict, noting that the conflict must be settled through dialogue.