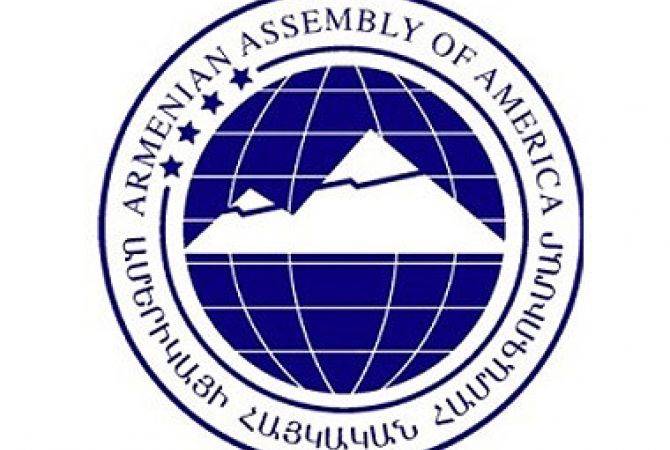 
YEREVAN, APRIL 24, ARMENPRESS. President Donald Trump’s April 24th statement on the 104th anniversary of the Armenian Genocide is a missed opportunity to end genocide denial, reads the statement issued by the Armenian Assembly of America.

“The failure to squarely acknowledge the Armenian Genocide reflects a pattern not only in this year’s presidential statement, but past administrations as well that fosters an atmosphere for denial and empowers authoritarian regimes to persecute Christians and other minorities,” stated Assembly Executive Director Bryan Ardouny. “A genocide denied is an injustice to all who are being persecuted,” he added.

The plight of the Armenian people captured the attention of the American public with President Woodrow Wilson stating that “the sympathy for Armenia among our people has sprung from untainted consciences, pure Christian faith, and an earnest desire to see Christian people everywhere succored in their time of suffering, and lifted from their abject subjection and distress and enabled to stand upon their feet and take their place among the free nations of the world.”

President Theodore Roosevelt stated that the atrocities committed by the “Turks on the Armenians” was “so hideous that it is difficult to name them…people whose little children are murdered and their women raped.” In a letter to Cleveland Dodge, who led the congressionally chartered Near East Relief organization headquartered in New York City, President Roosevelt stated further that it “was the greatest crime of the war, and failure to act against Turkey is to condone it…” Through the efforts of the Near East Relief, over $2.5 billion (in 2019 dollars) was raised at the time to help the survivors of the first genocide of the twentieth century.

While this year’s statement reflected a dictionary definition of genocide and also used an Armenian expression, Medz Yeghern, it fell short of President Ronald Reagan’s declarative statement in 1981: “Like the genocide of the Armenians before it, and the genocide of the Cambodians which followed it – and like too many other such persecutions of too many other peoples – the lessons of the Holocaust must never be forgotten.”

Earlier this month, bipartisan Armenian Genocide resolutions were introduced in both the Senate spearheaded by Sens. Robert Menendez (D-NJ) & Ted Cruz (R-TX) and in the House of Representatives spearheaded by Reps. Adam Schiff (D-CA) & Gus Bilirakis (R-FL). The same week, the Armenian Assembly joined Members of Congress for the Congressional Armenian Genocide Commemoration on Capitol Hill, and together paid tribute to the victims and survivors.

In addition, this month the Armenian National Institute (ANI) released a digital exhibit: “The United States Military in the First Republic of Armenia 1919-1920,” which documents the extent of U.S. humanitarian intervention during the time of the Armenian Genocide. Based upon the photographic collection of an American medical officer, Dr. Walter P. Davenport, the exhibit reveals the depth and breadth of measures taken by U.S. military personnel to stabilize the humanitarian crisis in Armenia, and especially the caretaking of the most vulnerable part of the population through hospitals, orphanages, food distribution points, and other facilities”.