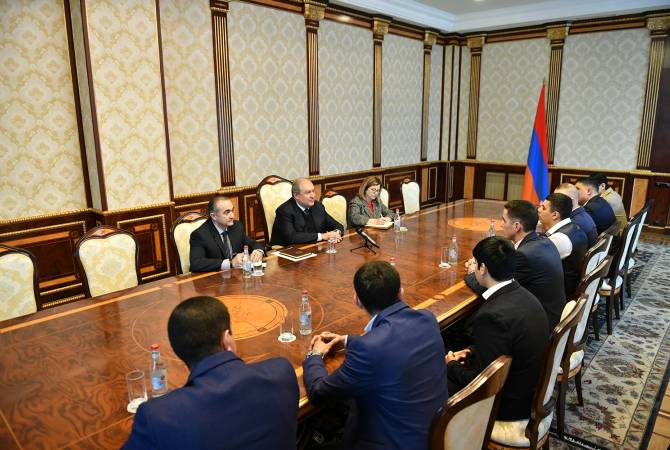 The President expressed gratitude to them for conducting their duty towards homeland with dedication. “There is one absolute truth: what had happened during that days is in the mind and heart of our people. No one has forgotten and will not forget it. Your Union is very valuable because in reality those people win who are ready”.

The President highly valued the former soldiers’ experience, and continued his remarks: “War is won not only with weapons, but also with spirit, heart and mind. If none of this exists, you are incomplete. If the heart is only, you are a patriotic boy who can go out and be killed. If you only have brain, maybe you will not be able to pass a certain border because the logic will say don’t do that. But when the two are working together, it is the key to victory. You should be confident that what you have done, you did it for the Fatherland and also for you”, the President said.

The President considered the heroic deeds demonstrated by the April war participants exemplary for the new generation. “You have passed an unexpected, difficult path regardless of your will, have lost your friends, and today each of you is a different person than you were before the war”, the President noted, adding that the life of each soldier has a great value, and everything must be done to rule out the tragic incidents.

The former soldiers stated that their goal is to unite all participants of the April military operations, consider supporting the families of fallen soldiers as their key priority. “For most of these families you are their sons”, the President said.

The young heroes also stated that assisting the wounded is one of their upcoming key tasks. President Sarkissian introduced the program on assisting disabled soldiers and stated that they were wounded for the sake of homeland, and the state must take action to show that it appreciates this sacrifice. Armen Sarkissian said he urges to involve disabled soldiers in public and private sector and integrate them to life. The former soldiers touched upon the issue of having a space for their Union, and the President promised to assist on this issue.