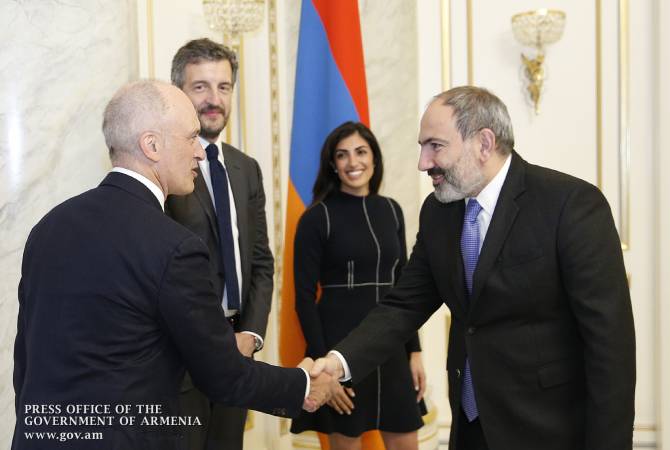 
YEREVAN, MARCH 14, ARMENPRESS. Prime Minister of Armenia Nikol Pashinyan received the representatives of Index Ventures venture capital fund - founder Nina Achadjian, Mike Volpi and Dominique Vidal, who used to work for Cisco, Amazon, Yahoo and other famous companies before. Minister of Transport, Communications and IT of Armenia Hakob Arshakyan was present at the meeting.

As ARMENPRESS was informed from the Office of the Prime Minister of Armenia, the guests presented to the PM the activities of Index Ventures and their plans to make investments in Armenian start-ups. They noted that they highly assess the positive developments in Armenia’s IT sector and are interested in the development and expansion of cooperation. In addition to the implementation of various technological and engineering projects, the team of Index Ventures plans to present to Armenian start-ups the options to get investments at Silicon Valley and the tendencies of the technological sphere.

Nikol Pashinyan welcomed the visit of the delegation led by Nina Achadjian to Armenia and their initiatives to cooperate with local companies and make investments. Pashinyan underlined that the IT sector is among the priorities of the Armenian Government and the Government strives for achieving a technology-based economy in the future. PM Pashinyan added that the Government is interested in the cooperation with Index Ventures and to discuss the proposals of implementing investment projects. The PM noted that the Government also makes consistent steps aimed at the continuous improvement of business environment.