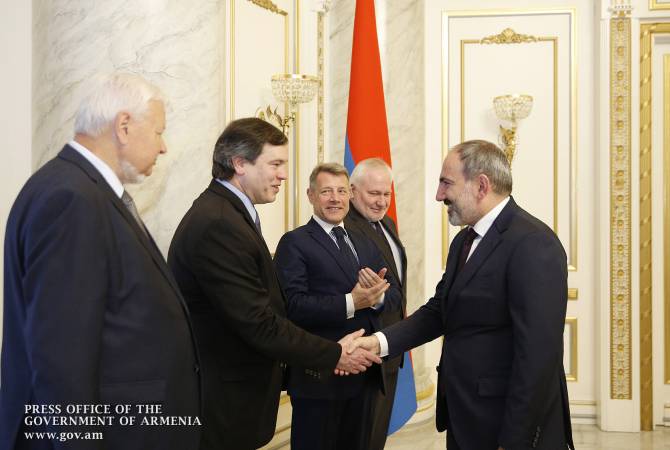 
YEREVAN, FEBRUARY 20, ARMENPRESS. Prime Minister of Armenia received the OSCE Minsk Group Co-chairs Igor Popov of the Russian Federation, Stéphane Visconti of France and Andrew Schofer of the United States of America, as well as Personal Representative of the OSCE Chairperson-in-Office Andrzej Kasprzyk on February 20.

As ARMENPRESS was informed from the Office of the Prime Minister of Armenia, Nikol Pashinyan welcomed the visit of the Co-chairs to Armenia and highlighted their role as an internationally authorized body to carry out talks on Nagorno Karabakh conflict settlement.

The OSCE Minsk Group Co-chairs congratulated Nikol Pashinyan on the victory of “My Step” bloc in the parliamentary elections.

PM Pashinyan presented to the Co-chairs the details of his non-formal meeting with Azerbaijani President Ilham Aliyev  in Davos in January.

The interlocutors exchanged ideas on the creation of an appropriate atmosphere for Nagorno Karabakh peace process. The sides highlighted the importance of the implementation of the ceasefire agreements.

Pashinyan and Aliyev have held 3 non-formal meetings so far. The 1st was in Dushanbe in September 2018 in the sidelines of the CIS summit. The 2nd took place in St. Petersburg in December 2018. This time the leaders met during the dinner organized in the framework of the informal meeting between leaders of CIS states following the EAEU regular sitting. Pashinyan-Aliyev 3rd meeting took place in January  2019 in Davos in the sideline sof the World Economic Forum.