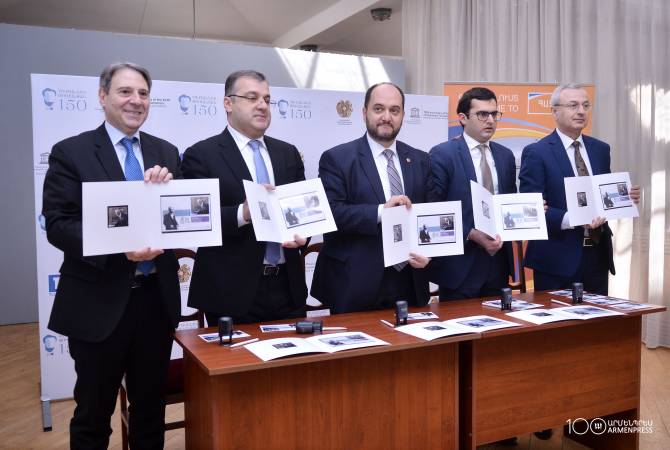 
YEREVAN, FEBRUARY 18, ARMENPRESS. A souvenir sheet with one stamp dedicated to the theme “Prominent Armenians. 150th anniversary of Hovhannes Toumanian” has been cancelled and put into circulation by HayPost CJSC in the premises of Hovhannes Toumanian museum, Armenpress reports citing HayPost.

The souvenir sheet with nominal value of 1100 AMD is printed in “Lowe Martin Group” printing house in Canada with the print-run of 20 000 pcs.

The author of the souvenir sheet’s design is the chief designer of HayPost CJSC Vahagn Mkrtchyan.

The postage stamp of the souvenir sheet depicts the famous Armenian writer, poet, national and public figure Hovhannes Toumanian against the background of his books and handwriting.

The postage stamp also depicts the logo of UNESCO as the 150th anniversary of Hovhannes Toumanian is included in the 2018-2019 UNESCO calendar of renowned people and important events.

The souvenir sheet was cancelled by Minister of Transport, Communication and Information Technologies of the Republic of Armenia Hakob Arshakyan, Minister of Education and Science Arayik Harutyunyan, Deputy Minister of Foreign Affaires Artak Apitonyan, Chairman of the Board of HayPost CJSC Juan Pablo Gechidjian, President of the Union of Philatelists Hovik Musayelyan.