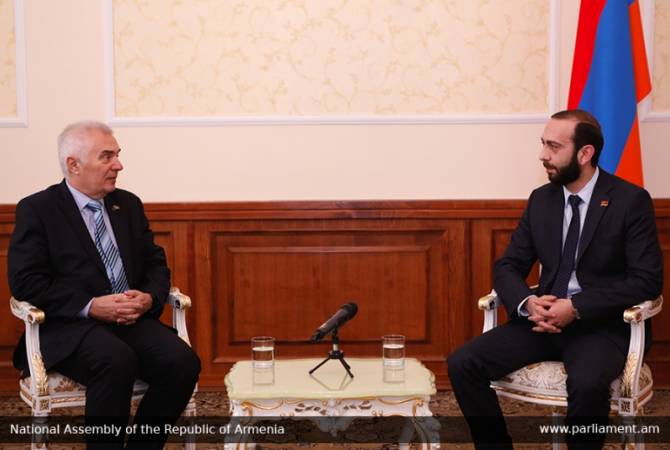 
YEREVAN, JANUARY 23, ARMENPRESS. Speaker of Parliament of Armenia Ararat Mirzoyan on January 23 held a meeting with Head of the EU Delegation to Armenia, Ambassador Piotr Świtalski, the Parliament told Armenpress.

Speaker Mirzoyan thanked the Ambassador for his role in deepening the Armenia-EU cooperation and expressed readiness to contribute to the development and intensification of these relations.

Ararat Mirzoyan assured that the new Parliament is committed to implementing the initiatives and outlined programs and recording results.

Touching upon the ratification process of the Armenia-EU Comprehensive and Enhanced Partnership Agreement (CEPA), Speaker Mirzoyan said it’s an important condition to boost the reforms in Armenia and the partnership with the EU based on the common value system. And the Speaker expected the Ambassador’s support on this matter.

Ararat Mirzoyan said the Armenian side attaches importance to the launch of dialogue with the EU on visa facilitation for the Armenian citizens. “I think this will be a great achievement and will reach the relations to a new level”, the Parliament Speaker said.

In his turn the EU Ambassador congratulated the Speaker on assuming office and highlighted the fact that he became the leader of the Parliament which has been formed based on the results of free, fair and transparent elections. Piotr Świtalski said the new Parliament has all opportunities for real parliamentarism in Armenia. He also valued the boosting of the inter-parliamentary ties and the role of the parliamentary diplomacy in developing the Armenia-EU relations. Ambassador Świtalski expressed readiness on behalf of the EU delegation to actively cooperate for the Parliament’s institutional capacity developments based on the needs assessed by the Parliament.