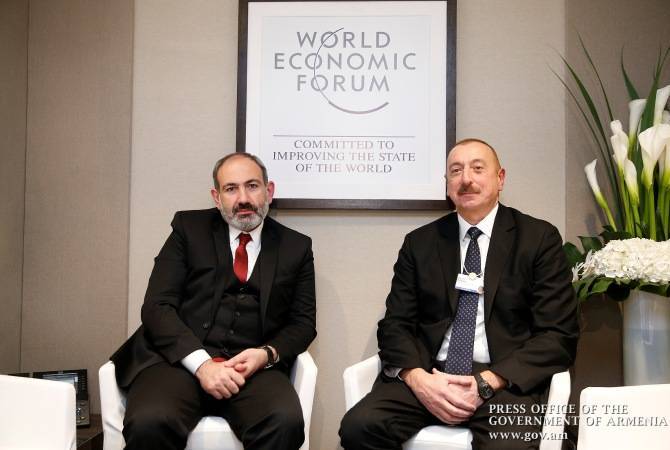 
YEREVAN, JANUARY 23, ARMENPRESS. Prime Minister Nikol Pashinyan has disclosed details from his recent unofficial meeting with Azerbaijani President Ilham Aliyev in Davos where he is on a visit for the World Economic Forum.

Speaking live on Facebook, Pashinyan said that the content of discussion of all three meetings with Aliyev concerns the history of the negotiations process.

“We have also discussed the possibilities, as to what conditions exist in terms of settlement. We haven’t discussed any specific detail, we simply exchanged ideas. To a certain extent this is also a chance for exchange of ideas and mutual familiarization with perceptions of the negotiations process. I would like to emphasize that the main focus of discussions is all what we speak about publicly also,” Pashinyan said.

The Armenian PM said the meeting with Azerbaijan’s president was not planned.

“We simply used this event’s occasion. It so happened, I simply find it to be very important to note – it so happened. The organizers of Davos, knowing that both of us are here, asked us whether we mind meeting and talking, we answered that we aren’t and we had an unofficial meeting, we talked and discussed. The basis of this meeting was the agreement that in general, if we happen to be in one place, at least we won’t avoid any contact,” the PM said.