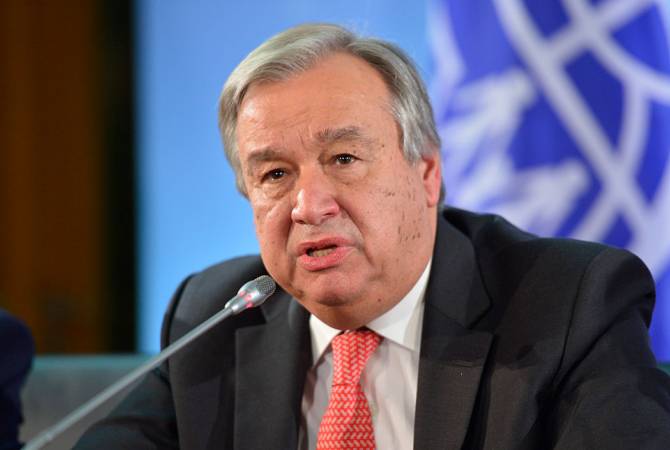 
YEREVAN, JANUARY 18, ARMENPRESS. Stéphane Dujarric, Spokesman for the UN Secretary-General, issued a statement on behalf of Secretary-General António Guterres, welcoming the meeting between the Acting Foreign Minister of Armenia Zohrab Mnatsakanyan and the Foreign Minister of Azerbaijan Elmar Mammadyarov held on 16 January in Paris under the auspices of the OSCE Minsk Group Co-Chairs, Armenpress reports citing the UN website.

“The Secretary-General appreciates the continued commitment of the sides to finding a negotiated and peaceful solution to the long-standing Nagorno Karabakh conflict and particularly welcomed the Ministers’ agreement on the need to take concrete measures to prepare the populations for peace. The Secretary-General reiterates the full support of the United Nations for the important mediation efforts of the OSCE Minsk Group”, the statement says.

On January 16, with the mediation and participation of the OSCE Minsk Group Co-Chairs Igor Popov, Stéphane Visconti and Andrew Schofer the meeting between Zohrab Mnatsakanyan, acting Foreign Minister of Armenia, and Elmar Mammadyarov, Foreign Minister of Azerbaijan, took place in Paris. Andrzej Kasprzyk, the Personal Representative of the OSCE Chairperson-in-Office, also participated in the meeting.

The officials had useful and constructive exchanges, which is also aimed at establishing more mutual understanding and mutual trust.

At the meeting, which lasted more than four hours, the sides touched upon a wide range of issues related to the peace process, including preparing populations for peace, security and sustainable economic development.

The new dates for the next meeting are not yet confirmed, however, the Foreign Ministers agreed to continue consistent, result-oriented talks in upcoming months.