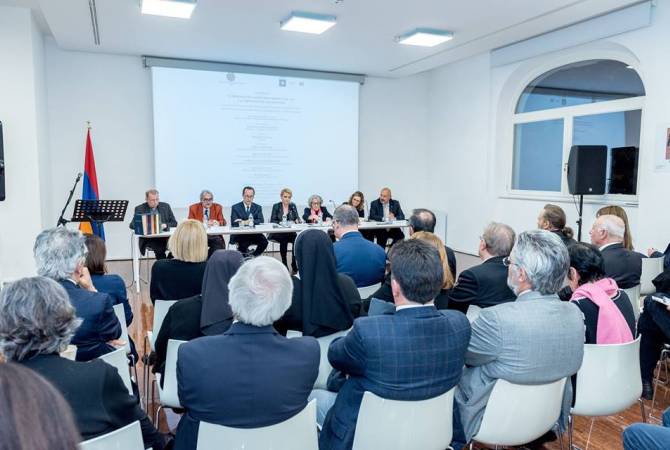 
ROME, DECEMBER 14, ARMENPRESS. By the initiative of the Armenian Embassy in Italy a conference titled “Memory of the Armenian Genocide and Prevention of Genocides” was held in Rome, reports Armenpress.

The conference was organized on the occasion of the 70th anniversary of the Convention on the Prevention and Punishment of the Crime of Genocide and the Universal Declaration of Human Rights.

Armenian Ambassador to Italy Viktoria Baghdasaryan in her remarks stated that although more than 100 years have passed since the first genocide of the 20th century, today’s crimes against ethnic and religious groups based on identity show that the world is not free of this disgusting phenomenon.

“This is another signal to the international community that the threat of genocides and crimes against humanity is not eliminated yet and requires united and consistent efforts of the international structures, states and civil society”, the Ambassador said.

She also touched upon Armenia’s initiatives in high international platforms on preventing genocides and the importance of international condemnation and recognition of the Armenian Genocide. “Such crimes against humanity require common actions by the international structures and the civilian community. It’s worth to mention that the causes of the repetition of genocides and crimes against humanity are the absence of unity, vigilance and consistency to recognize and condemn genocides”, she said.

Viktoria Baghdasaryan added that Armenians, as a people who survived genocide, feel a moral responsibility for raising the issue of prevention of genocides.

A number of other political, cultural figures, professors and Armenian community representatives also delivered remarks during the event.