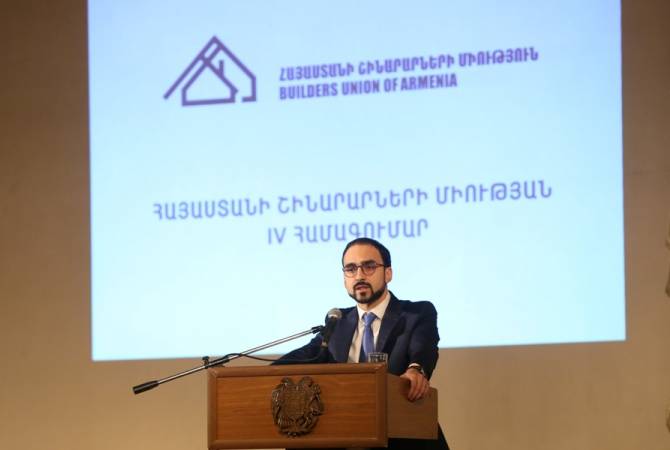 In his remarks, Avinyan said that Armenian construction workers have for many centuries built wonderful architectural monuments, strong castles, bridges and roads – greatly contributing to the economic welfare, physical security, spiritual development and expansion of outlook of the Armenian people.

He noted that after the declining indicators of the past years, the sector has stabilized. During the 10 months of the current year, total construction volumes grew 6,5%, with 25% growth of state-funded constructions.

Avinyan added that the state is always focusing on the construction area.

He mentioned that the government is suggesting to define new privileged conditions for young people within the framework of the Affordable Apartment to Young Families mortgage project, to increase the eligible age threshold and lower interest rates.

At the same time, he said that numerous problems exist in the construction sector that require a solution.

The procurement process requires improvement by revising the evaluation standards, he said.

In addition, a mechanism must be developed to enable Armenian construction companies to participate in international construction tenders and to introduce new designing and construing technologies in the Armenian market.

Avinyan noted that this year marks the 30th anniversary of the devastating 1988 earthquake, and that despite the implemented work there are still homeless families in the disaster zone. He noted a recent governmental decision to provide housing for 44 homeless families. Avinyan assured that the housing project for the homeless in the disaster zone will be boosted. Under the 2018-2022 action plan, the government eyes to complete the housing assistance program by 2021.

Concluding his speech, Avinyan said that the congress is not only a good chance to recap the implemented work and to outline future plans, but to also boost the state-NGO-business community cooperation.

He said that the union’s role in developing and implementing programs is appreciated by the government.