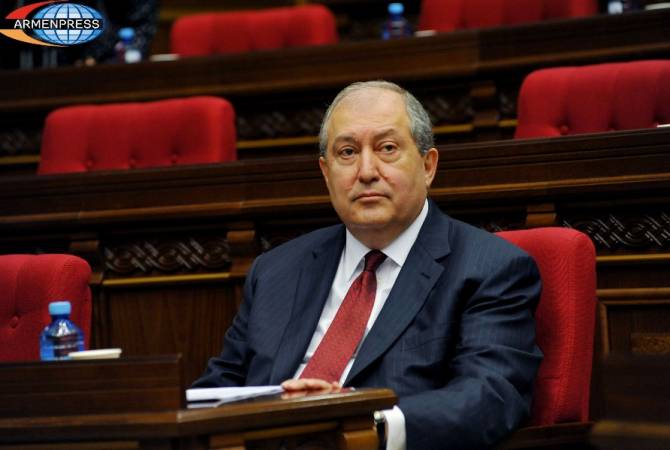 
YEREVAN, OCTOBER 22, ARMENPRESS. Armenian President's Office is expected to make a statement regarding President's actions concerning the controversial bill on amending the Rules of Procedure law of parliament that was adopted on October 2 and still hasn’t been signed into law by him.

Adopted bills should be signed into law by the president to come into effect.

Sarkissian’s office said the president's office will issue a statement until the defined deadline.

Under the law, the president has 21 days to either sign a bill into law or to forward it to the Consitutional Court to dispute its constitutionality.

The controversial bill is an amendment to the Rules of Procedure law of the parliament, whereby in the event of a parliament session being unable to be held because of lack of quorum, or if lawmakers are anyhow prevented from participating, it will be considered interrupted rather than failed, with a possibility of resuming at a later date.

The bill was perceived as an apparent limitation of possible circumstances of dissolution of parliament initiated by Republicans. It was adopted on October 2 by the parliament which is dominated by Republicans [HHK], and sparked demonstrations.  On that day, PM Nikol Pashinyan sacked Cabinet members and governors representing the ARF and Tsarukyan factions for supporting the bill.

Coincidentally, the first round of electing a prime minister will be held on the very same day – October 24.