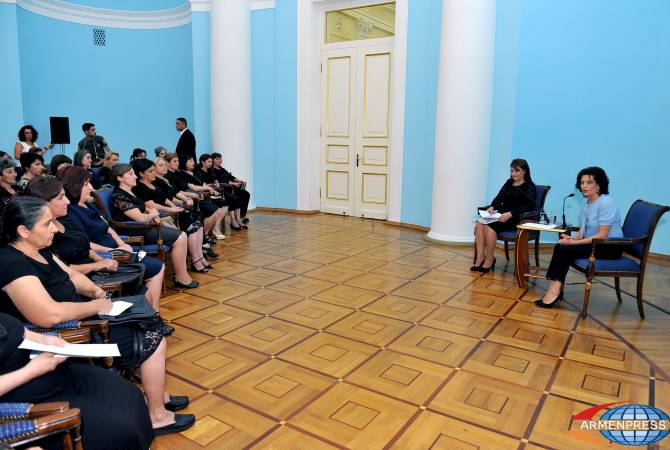 
YEREVAN, SEPTEMBER 15, ARMENPRESS. The mothers of fallen soldiers of the April 2016 Four-Day War are joining the “Women For Peace” initiative of Prime Minister Nikol Pashinyan’s wife Anna Hakobyan, the mother of captain Armenak Urfanyan said at a meeting with Mrs. Hakobyan.

“All mothers in the world reject war. We welcome and join Anna Hakobyan’s initiative by making a united call to mothers all around the world to fight for peace,” Hamest Nersisyan, the fallen captain’s mother said.

Mrs. Hakobyan said she will continue her campaign with even greater confidence by having the support of the mothers of the fallen men.

“I spoke about this initiative for the first time in Moscow. And at a meeting with the Armenian community in Paris, I was addressed with an accusatory question as to how will the mothers of the April Four-Day War victims treat this initiative. I will carry this campaign with greater confidence by having your consent to join this initiative. We owe you till the end of our lives, because it is an undeniable fact that the settlement of the April War happened thanks to your sons,” she said.

The PM’s wife also attached importance to the message which is addressed to the Azerbaijani mothers, who are also against war. “You are rendering a great service to the mothers whose sons’ lives can still be spared. It is no coincidence that it were your very sons that became heroes during the Four-Day battles. It is this kind of mothers who can give birth to heroes. Your message addressed to Azerbaijani mothers is very important, this message requires courage, which you have. Motherhood doesn’t know nationality, religion or skin color.  Motherhood only knows limitless love and caregiving. I hope that our voices will reach Azerbaijani mothers, that they too will speak against war and for peace. In this case our voice will someday reach the men who give orders to fire. I promise you to be firm and decisive in this campaign,” the PM’s wife said.

She mentioned that this call isn’t a sign of weakness, and in the event of not reaching peace she is ready to take up arms and stand at the border. “We are advocating as mothers and not as a state. Military-exercises took place in Armenia two days ago, which don’t imply peace. We will either win and they will [normally] sit around the negotiations table and solve this problem, or we will lose, and they will again continue to shoot. I don’t have any news from the other side of the border yet. If we don’t achieve peace, I am personally ready to take up arms and head to defend our country. I promise to do everything in order for the opposite side not to perceive our initiative as a sign of weakness,” she said.

The initiative’s main mission is to contribute to the peaceful settlement of the NK conflict.