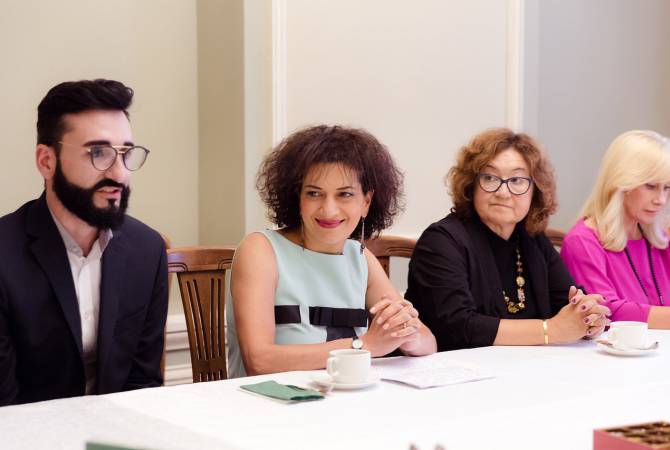 At the meeting, Hakobyan and Tregulova discussed a number of issues concerning cooperation with the gallery, including issues related to the possible opening of the Tretyakov Gallery’s Yerevan branch.

Afterwards Hakobyan met with a number of women figures of different Russian sectors.

The PM’s wife informed the participants of the meeting about her Women For Peace campaign, asking them to accept her speech exclusively as a speech of a woman and a mother.

Noting that the main mission of the initiative is to contribute to the peaceful settlement of the Nagorno Karabakh conflict, Hakobyan particularly said: “I actually think that it isn’t important how this conflict originated. What matters is the human lives, the young human lives which are paid before this conflict”.

Hakobyan recalled the 2016 April War, when she was an executive of a news media, and followed both Armenian and Azerbaijani news, watched all coverage.

“Believe me, when looking at Azerbaijani soldiers, their [faces], I was noting that these children aren’t different from our soldiers with anything, the expression in their eyes was the same – fearful and anxious,” she said.

“I would like to say that no politics and no political interest can justify the violent death of children who are newly entering their lives, the pain of the parents and the longing of orphaned children,” Mrs. Anna Hakobyan said.

Hakobyan called on the political decision-makers of all sides to do their best to bypass the cannons, and asked the participants of the meeting to join the campaign aimed at establishing peace for the sake of preserving the young lives standing at both sides of the border.

With this purpose Hakobyan invited the participants of the meeting to visit Armenia and Artsakh and to make the call from there. She also requested the women to use their opportunity to address this call from the other side of the border, Azerbaijan, as well.

The women emotionally and warmly accepted Hakobyan’s speech and expressed willingness to join the campaign and to unite their voices for peace in the region and other parts of the world.

The women who took part in the meeting included lawmakers, politicians, bankers, media executives and others.

The full transcript of Anna Hakobyan’s speech is available in Armenian.