#CultTalk: Arsinée Khanjian to shoot a film on Armenian Quarter of Jerusalem 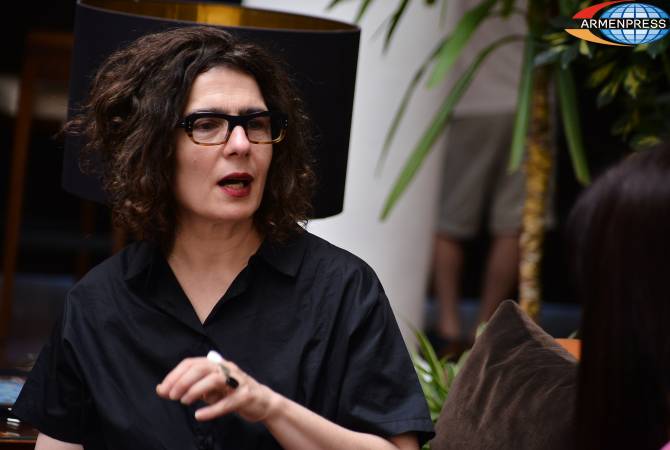 
YEREVAN, JULY 17, ARMENPRESS. Armenia’s most powerful force are its culture and artists. Actress, producer Arsinée Khanjian is confident that there is no shortage of great artists in Armenia.

The renowned actress was in Armenia during these days to participate in the 15th Golden Apricot Yerevan International Film Festival. ARMENPRESS had a chance to talk to the famous actress about the festival, the cooperation with her husband, famous director Atom Egoyan, and upcoming plans.

The Golden Apricot was born and grew in difficult conditions. The sphere of culture is not the easiest sector. The Golden Apricot believed that such festival is important for Armenia, it’s important to have such investment in culture. And the festival initiators, ignoring the difficulties, worked for many years by demonstrating a professional approach. And thanks to this the Golden Apricot became a global phenomenon in honor and for the benefit of Armenia.

We in the Diaspora have a great love towards culture. We have created theatrical groups in schools, cultural institutions. But these are semi-professional groups. My father and uncle also acted in the performances of such groups. I appeared in Canada at the age of 17. I have studied the theatrical art. First of all, I am a theater actress by profession. Thereafter, I have studied linguistics in the university, and then I continued my master’s degree in political science. Many are not aware of this and do not touch upon my activity in this field. But, really, my greatest interest is the political science. And my thesis related to the relationship of culture and politics.

We met with Atom thanks to theater. I was working at an Armenian semi-professional theater in Montreal, I even didn’t imagine I would be able to become an actress. I was interested in political science. I was already studying at master’s degree, and we got acquainted at that time. Atom was carrying out his first project, the Next of Kin film. He was searching for Armenian actors. I participated in hearings, and perhaps, he liked my acting skills. And so we are together since 1984.

Advantages to work with Egoyan

It’s easy to work with Atom since he is a very talented stage director. He respects actors very much. When he writes his scenarios, he always keeps in mind the actors with whom he would like to work. And he also has very free relations with all actors. I have worked with many film directors in France, Canada, have cooperated in different films. Being Atom’s wife, I must say that sometimes it’s easy to work with him, sometimes – more difficult. We know each other’s thinking, and if we agree on it, we more easily come to an agreement. There are both pros and cons, but the advantages to work with him are much more.

I would mention the Calendar and Ararat movies. Both are important, and I like both very much, but for various reasons. The Calendar was our first film in Armenia, we came here in 1992. We were working without a scenario for the first time and were creating the film based on the shootings of the day.

The Ararat movie touches upon a very important topic, the Genocide. I think Atom is the only one among Armenian and foreign directors who shot a film on the Genocide, who touched upon not only the history of the Genocide, but its denial in modern times. And in this sense both films are very important.

There are two programs which will be implemented in different times. The one is theatrical: I am going to play the main role in Chekhov’s The Cherry Orchard performance. It will be performed in Toronto. In addition, I am going to shoot a film on the Armenian Quarter of Jerusalem. The project is called Quarters. There are four quarters in Jerusalem, but I will touch upon the Armenian Quarter.

This project is perfect for me, I will act as a director-stage director for the first time. Foreign directors will also work with me, each of them will shoot a film about their own quarter. Each of the films will last 30 minutes, and thus there will be four films.