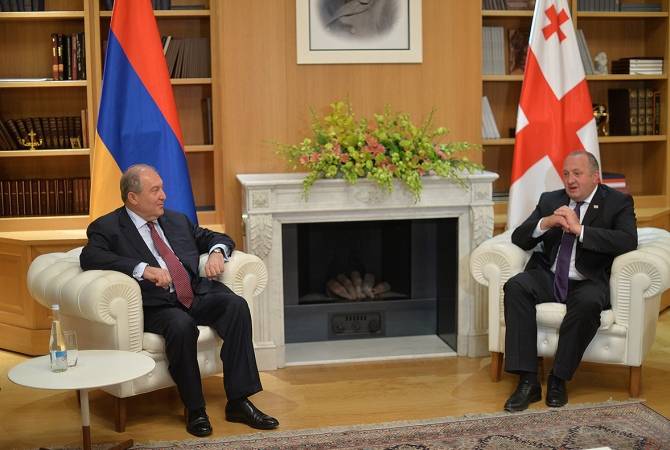 The Armenian President and the First Lady were invited to attend the 100th anniversary celebrations of Georgia’s First Republic.

On the first day of the visit President Sarkissian had a one-on-one meeting with Georgian Prime Minister Giorgi Kvirikashvili, followed by an expanded format meeting of delegations, the Armenian President’s Office told ARMENPRESS.

Sarkissian and Kvirikashvili were pleased to note the dynamically developing and yearly strengthening relations between the two friendly countries, and mentioned that they are proud of the common history, during which they’ve learned from each other and are now happy over one another’s achievements.

Both sides attached importance to the continuous development and enhancement of relations in an atmosphere of mutual trust, and maximal use of existing potential.

The sides especially highlighted partnership in the fields of tourism, energy, IT and several other sectors.

The recent political changes in Armenia were also discussed.

The Georgian Prime Minister was pleased to note the civilized and peaceful resolution of the situation and attached importance to President Sarkissian’s role and efforts in the process and noted that Georgia is interested in the stability of Armenia. In turn, President Sarkissian said that all joint programs won’t simply continue, but also expand.

“We are interested in the maximal use of the entire potential of our relations in different sectors”, the Armenian president said.

Later the President had a meeting with his Georgian counterpart - Giorgi Margvelashvili.

Speaking about the 100th anniversary celebrations both in Armenia and Georgia, the Armenian president noted that the idea of freedom, which remains the leading idea today, is at the foundation of the historic anniversaries for both peoples.

“Active intergovernmental dialogue anchored on historic base of mutual-understanding between our peoples and traditional friendship creates serious prerequisites for outlining new directions of partnership,” the Armenian president said.

The presidents also talked about the recent changes in Armenia and the prospects of development of the Armenian-Georgian ties.

Both sides expressed confidence that not only are they able to maintain the current level of relations through joint efforts, but also to boos mutual cooperation – elevating it to a new qualitative level.

During the warm and frank meeting the Armenian president also invited his Georgian counterpart to visit Armenia.