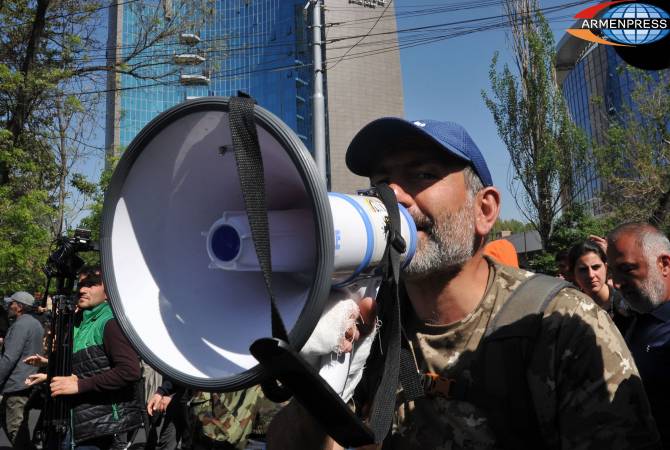 
YEREVAN, APRIL 20, ARMENPRESS. After a week of sporadic demonstrations throughout Yerevan, opposition MP Nikol Pashinyan and his crowd of supporters once again took to the streets of the Armenian capital Friday morning – starting a march from the Gyulbenkyan Street.

The opposition leader told his followers to block the street with cars. Police dispatched a tow truck to remove the vehicle, which prompted the demonstrators to surround and block it.

Heavy police presence was reported at the scene as the situation escalated, but fortunately the sides didn’t clash.

The MP once again called on his crowd to block the streets across Yerevan.

Deputy Chief of Police of Yerevan Valery Osipyan was on-site negotiating with the MP.

Osipyan once again reminded the protesters that they are required by law to notify the police about their actions.

Opposition protests began in the Armenian capital of Yerevan a week ago.

15:23 - Protesters continue marching across Yerevan. Police officers are detaining demonstrators who attempt to shut down traffic by using their vehicles in busy streets.

14:40 - Yerevan police called on initiators of the ongoing rallies to cease actions which restrict the rights and freedoms of others and to re-locate the demonstrations to locations where violations of the law will be ruled out – in order to avoid any kind of endangerment of public life.

Yerevan police said the blocking of traffic with vehicles at the illegal calls of the rally initiators pose a serious danger for public safety.

13:30 – Opposition lawmaker Nikol Pashinyan, along with 200 supporters, march through Khanjyan Street in downtown Yerevan after entering a nearby university and calling for a student’s strike.

12:18 - YPD confirms that plain-clothed officers are on-duty and active in the locations of the demonstrations.

11:57 - Reporter Tirayr Muradyan claims to have been detained by police on the Yerevan-Abovyan highway. Yerevan Police Department told ARMENPRESS the reporter hasn’t been detained and officers are simply questioning him.

11:46 - Crowd of protesters attempt to block Alek Manukyan Street in the central part of the city. Police officers clear the street and cordon off the sidewalks. Several demonstrators have been detained and shortly afterwards traffic was restored. Opposition MP Nikol Pashinyan is marching in Davitashen district.

11:21 – Yerevan police issue statement saying law enforcement agencies are willing to assist the holding of peaceful rallies in locations where the demonstrations will not restrict the rights and freedoms of others. Police called on the illegal demonstrators to refrain from obstructing on-duty officers and adhere to their obligations as initiators of a rally.

11:18 – Demonstrators attempt to shut down traffic on the Yerevan-Abovyan highway. Heavy police presence is seen at the scene attempting to prevent drivers from parking their cars in the streets. Protesters are being detained.

The rallies are led by Opposition lawmaker Nikol Pashinyan, who has called on his supporters to launch civil disobedience.

The rallies began with a sit-in at France Square in downtown Yerevan, followed by sporadic marches in the city streets. The protesters even began blocking intersections and shutting down traffic. The situation escalated when the crowd of protesters and MP Pashinyan himself breached into the headquarters of Public Radio of Armenia, demanding airtime on April 14.

Then on April 16, protesters and riot police clashed in a brief incident on Baghramyan Avenue – one of the main city streets housing the parliament, Constitutional Court and the Prime Minister’s residence.  The Yerevan Police Department (YPD) has called on the opposition crowd to refrain from illegal actions and to maintain public order.

YPD said they are entitled to detain protesters who are violating public order and to cease the illegal rally, because the demonstrations are violating the rights of others and endangering public safety.

About 100 demonstrators have been detained for misdemeanors. Several others have been placed under arrest for causing a brief riot earlier in central Yerevan.