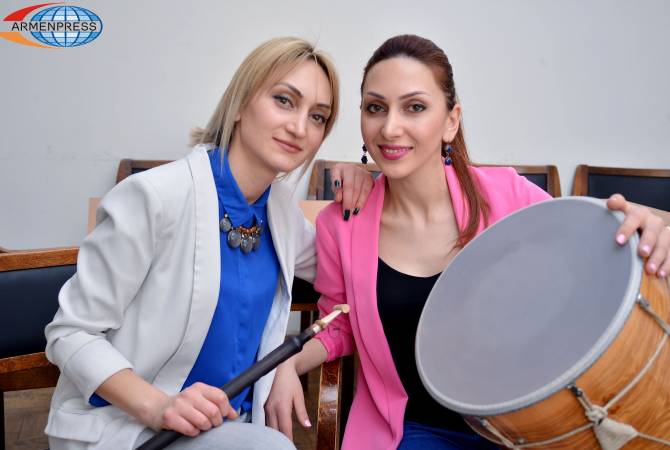 The goal of the project is to introduce young talented people – actors, directors, painters, musicians and etc., to the public, to tell them what they are engaged in, what are their interests, what problems they face and what program they have to change the world.

They have passed quite a difficult path, overcame numerous obstacles and eventually reached the boundaries of implementation of their dreams and goals. They break stereotypes: the sisters play duduk and dhol (double-headed drum). They demonstrated love towards music from the early age. Anna plays duduk, and Anahit chose dhol. Today the sisters cooperate with the best musicians, have created their own musical group which is called “Mkhitaryan sisters and friends”.

Duduk and dhol - companion of life

No one from our family was engaged in music. But we always loved music. And it turned so that we chose these instruments. We were not afraid from the view that both duduk and dhol are not instruments for girls. There was a wish, love towards these musical instruments. And we play with great pleasure.

It’s one thing when you just play on the instrument, and another when you form a band and organize concert. We were very excited from our first concert, and tried to do so that everything would be perfect. And we succeeded. The first concert was our first step. I and Anahit managed to have concerts, but the Mkhitaryan sisters and friends band was performing for the first time.

It’s quite difficult to prepare a great concert program since it must be very interesting to the audience. We organized the first concert in our hometown – Vanadzor, dedicating it to the memory of our father. Absolutely other feelings…

We made an interesting video aimed at expressing out love towards Serj Tankian through our work. We love him very much, since, in addition to being a good musician, he is also from Vanadzor. As we like his works very much, we decided to prepare unique developments among his works by folk instruments. His reaction was very unexpected for us. We were excited. He wrote to us that he is very proud…

Tankian called us talented musicians. I think hearing such words from such a professional musician is a very important appreciation for everyone. It was a very happy moment.

Mkhitaryan surname and the famous Armenian with the same surname

We love Henrikh Mkhitaryan very much. Once we were travelling, and Anahit was asked at the airport whether she is the sister of Mkhitaryan. Many people ask this question to us.

He is the pride of our entire people, we all are happy for his achievements, goals…You have other feelings when you have the same surname.

I don’t say that all doors must easily open to young artists. But when you develop plans, take the first steps in the field, you hope that they will encourage you. New musicians must have a little more place in concerts. There is a circle where it’s quite difficult to appear.