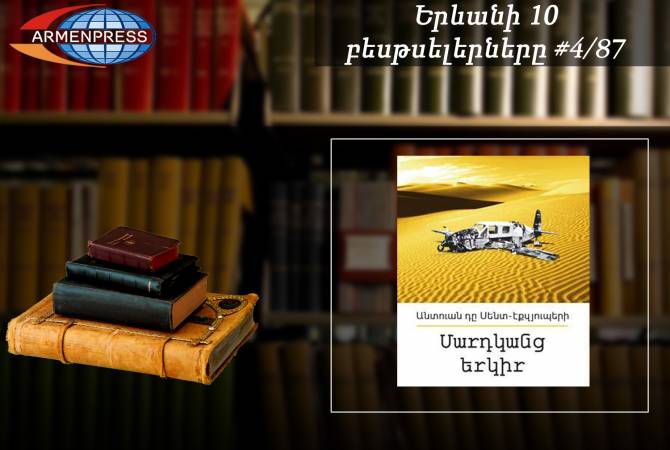 A new book has debuted in the list, being ranked 2nd – Lia Asatryan’s Life and I. A collection of poems, it includes English and Armenian poems from 2007-2017. Asatryan dedicated this book to her grandfather, literary critic Sergey Sarinyan.

Unfound Chamomiles by Edgar Harutyunyan is ranked 3rd. The story is about complex human relationships – love, friendship and betrayal.

Antoine de Saint-Exupéry’s Terre des homes, literally translated as Land of Men, published in English as Wind, Sand and Stars is 4th in this week’s list.

Winter of Roden by Davit Samvelyan has returned to the bestselling list, ranking 6th.

Fahrenheit 451 is a dystopian novel by American writer Ray Bradbury, published in 1953. It is regarded as one of his best works. The novel presents a future American society where books are outlawed and "firemen" burn any that are found. The book's tagline explains the title: "Fahrenheit 451 – the temperature at which book paper catches fire, and burns..." The lead character is a fireman named Montag who becomes disillusioned with the role of censoring works and destroying knowledge, eventually quitting his job and joining a resistance group who memorize and share the world's greatest literary and cultural works. The book is 7th in this week’s list.

Oscar Wilde’s The Picture Of Dorian Gray is ranked 8th. Dorian Gray is the subject of a full-length portrait in oil by Basil Hallward, an artist who is impressed and infatuated by Dorian's beauty; he believes that Dorian's beauty is responsible for the new mode in his art as a painter. Through Basil, Dorian meets Lord Henry Wotton, and he soon is enthralled by the aristocrat's hedonistic worldview: that beauty and sensual fulfillment are the only things worth pursuing in life.

Newly understanding that his beauty will fade, Dorian expresses the desire to sell his soul, to ensure that the picture, rather than he, will age and fade. The wish is granted, and Dorian pursues a libertine life of varied and amoral experiences, while staying young and beautiful; all the while his portrait ages and records every sin

99 Francs is a 2000 novel by French writer Frédéric Beigbeder. The book follows Octave Parengo, a successful copywriter that appears to have it all. Not only is his job going well, but he has surrounded himself with expensive material goods, beautiful women, and lots of cocaine. That easygoing life ends when he becomes disillusioned with his life and his job after a meeting with a client ends with him smearing the word "pigs" on the walls using his own blood.

In 2007 the book was adapted into a film by the same name.