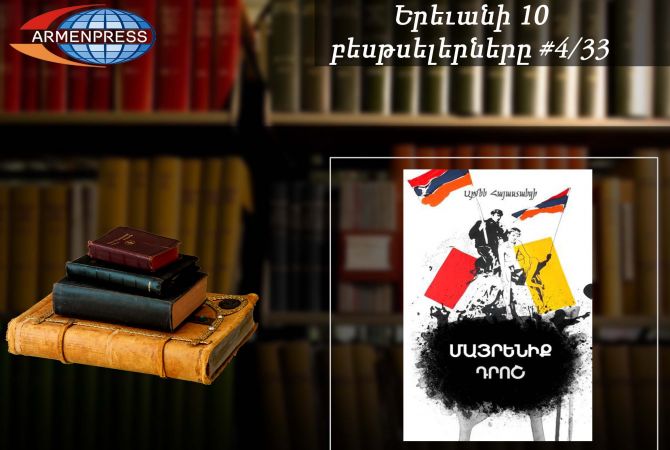 A Haunted House by Virgina Woold comes next. It is a 1944 collection of 18 short stories. It was produced by her husband Leonard Woolf after her death although in the foreword he states that they had discussed its production together. The book was translated from English by Manik yegnayan. The editors are Ashot Gabrielyan, Taguhi Ghazaryan.

Mark Aren’s “Where wild roses bloom” is ranked 3rd in the list. This is the second novel of the author which describes the inner world of an Armenophobic Turkish former serviceman, when he, already an old man, suddenly hears a lullaby song that reminds him of his mother and later finds out that the song is in Armenian: realizing his parents were Armenians. The same former serviceman spends his remaining life searching the graves of his parents, without knowing that it was a misunderstanding.

“A Room of One's Own” by Virginia Woolf is ranked 4th the list. It is an extended essay first published on 24 October 1929. The essay was based on a series of lectures she delivered at Newnham College and Girton College, two women's colleges at Cambridge University in October 1928. While this extended essay in fact employs a fictional narrator and narrative to explore women both as writers of and characters in fiction, the manuscript for the delivery of the series of lectures, titled "Women and Fiction", which was published in Forum March 1929, and hence the essay, are considered non-fiction.

A new book enters the list entitled “Instead of Unread Books” by Armen Sargsyan. It is ranked sixth. It the author’s first book.

“The Fault in Our Stars” is the 7th novel by author John Green, published in January 2012. The title is inspired by Act 1, Scene 2 of Shakespeare's play Julius Caesar, in which the nobleman Cassius says to Brutus: "The fault, dear Brutus, is not in our stars, / But in ourselves, that we are underlings."

Paulo Coelho’s “The Spy” enters the list. The Spy brings to life the true story of Mata Hari, the famous courtesan and accused spy who was executed for treason one hundred years ago. Mata Hari was a dancer who shocked and delighted audiences during the First World War, and she became a confidant to some of the era’s richest and most powerful men. She dared to liberate herself from the moralism and provincial customs of the early twentieth century, but she ultimately paid for it with her life. As she waited for her execution in a Paris prison, one of her last requests was for a pen and some paper to write letters. The book is ranked 8th.

“Veronika Decides to Die” by Paulo Coelho is ranked 9th in the list. It tells the story of 24-year-old Slovenian Veronika, who appears to have everything in life going for her, but who decides to kill herself. This book is partly based on Coelho's experience in various mental institutions, and deals with the subject of madness. The gist of the message is that "collective madness is called sanity".

Oscar Wilde’s “The Picture of Dorian Gray” concludes the list. It is a philosophical novel, first published complete in the July 1890 issue of Lippincott's Monthly Magazine. The book was published in 1891.