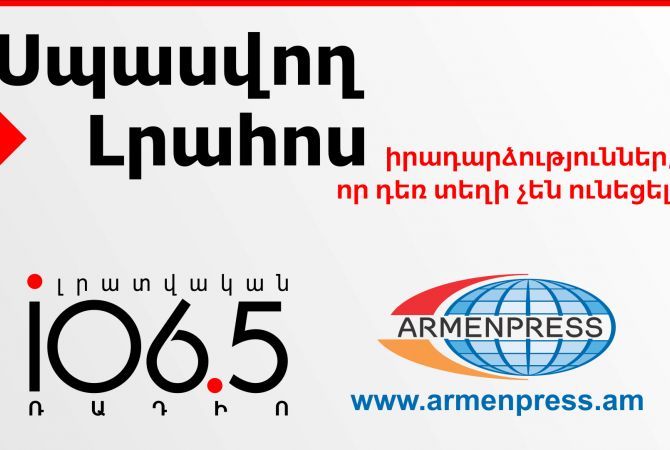 
YEREVAN, APRIL 20, ARMENPRESS. “Armenpress” presents on the air of “LRATVAKAN” radio all that you will read, hear and see in today’s news.

“Stop the consumption of Turkish goods in Armenia and find alternative ways”. Economist Tatul Manaseryan, the organizers of “Protest aganst Turkish goods” initiative and the members of “For the law” initiative will speak about this topic. It is planned to hold a protest in front of the Government building on April 21 during which the participants will burn Turkish products.

The President of the Protection of Freedom of Speech Committee Ashot Melikyan will present Committee’s 2016 first quarterly report which relates to the situation of the freedom of speech and the violations of journalists’ and media rights in Armenia.

On April 20-21 with the initiative of “HayPost” CJSC “PostEurope” 31th plenary conference of the National Postal Operators of Europe will be held in Yerevan. Director General of the Universal Postal Union Bishar Abdirahman Hussein, the chairman of “PostEurop” management board Žan Pol Forsevil and Secretary General Botond Szebeny, as well as over 120 representatives of National Postal operators from 40 countries will arrive in Armenia to participate in this conference.

Linguistic University graduates will teach in rural and urban bordering schools. In this context a cooperation agreement will be signed between Yerevan State Linguistic University after V. Bryusov and “Teach for Armenia” educational center. According to that, graduates and youth professionals will teach in urban and rural bordering schools for 2 years. A work will also be done for the preparation of qualified specialists to teach foreign languages in bordering communities.

You can read about these and other topics on armenpress.am and listen to the news on the air of “LRATVAKAN” radio. Follow us on TWITTER and FACEBOOK.