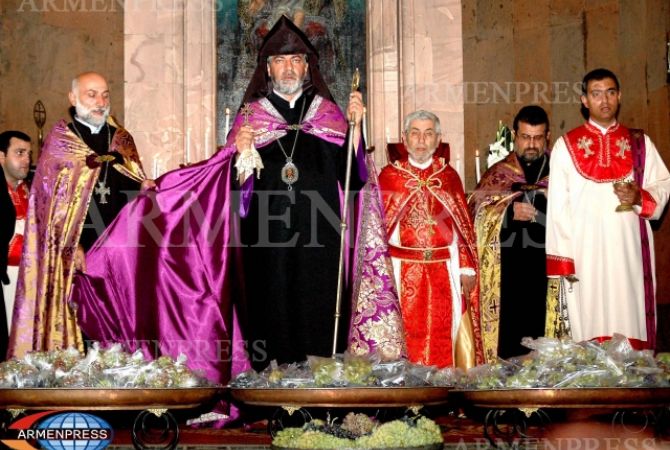 On the day of the Feast of the Assumption of the Holy Mother of God, the blessing of grapes takes place immediately after the Divine Liturgy.  The ceremony is rich in symbolism and emphasizes the important role the Virgin Mary assumed in the revelation of God.

The custom of blessing grapes, the first fruits of the harvest, can be traced back to Old Testament times, when farming was a common vocation that so much care and time was given to it.  Of the vast variety of produce, grapes had a special place of honor and were considered the "first fruits", because they were the first produce of harvest.

Among the Israelites, as among many neighboring cultures, grapes were regarded as belonging in a special way to God since they were the first fruits.  It was He who gave the gift of the whole harvest and to offer Him the first fruits was to acknowledge complete dependence on Him.  Special services of thanksgiving were conducted by priests in the temple, a tradition that prevailed to the time of Christ.  With the birth of Jesus, these dedications took on a new meaning.  Jesus Christ was the first born -- or first fruit -- of Mary and, as such, was offered to God in the temple. (Luke 2:25-30)

Armenian Church doctrine teaches that the Blessed Mother Mary has a primary place of honor because it was 'of' her and 'by' the Holy Spirit that God became incarnate (took human flesh).  She is seen as the image of humanity fully obedient to God and ultimately sanctified by doing God's will.  Therefore on the feast remembering her Dormition (falling asleep in Christ) and Assumption (ascending to heaven), we celebrate the Blessing of Grapes.

Celebrated is the person of St. Mary, who gave birth to Jesus Christ, the first fruit.  Christ gave His blood to us for eternal life and in remembrance we bless the grapes, the fruits of the earth.

This Blessing of Grapes is celebrated during the month of August, the end of the summer and beginning of harvest.  It is traditional to use seedless grapes to emphasize that this fruit came into being without seed just as Christ became man without any human agent.