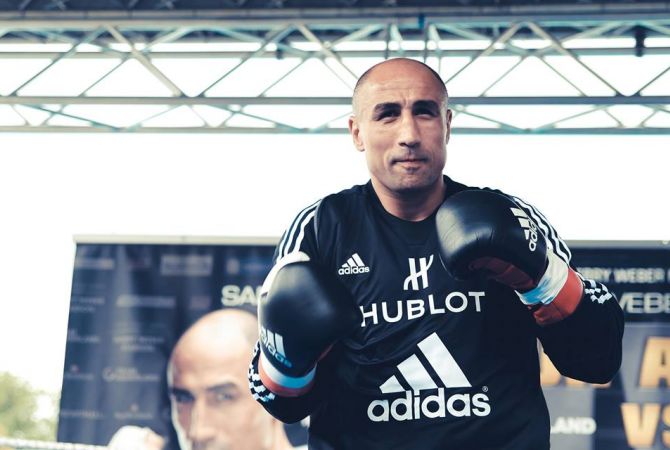 
YEREVAN, JULY 14, ARMENPRESS. Armenian-German professional boxer Arthur Abraham and German professional boxer and a former two-time WBO Super Middleweight Champion Robert Steiglitz held an open training in Germany. During the training they showed their skills to the representatives of mass media and box fans. The 4th bout between Arthur Abraham and Robert Stieglitz will take place in Halle, Germany on July 18. As Armenpress reports, it will be broadcast on SAT1 and on Public TV Company of Armenia.

Arthur Abraham is an Armenian-German professional boxer residing in Berlin. Abraham is the former IBF Middleweight Championfrom 2005 to 2009, making ten successful defences of his title, the fourth most in middleweight history. He is the current WBO Super Middleweight Champion. Arthur Abraham was born in Yerevan on 20 February 1980 to parents Grigor and Sylvia Abrahamyan. His family members call him "Avo", short for Avetik. His little brother, Alexander, is also a professional boxer and his older brother, Christian, owns a furniture shop. He moved to Germany with his parents and brothers at the age of 15. He became a citizen of Germany in August 2006. As a teenager, Abraham showed an interest in cycling. He became the North Bavarian and Franconian Youth Champion. However, after watching an exciting Mike Tyson fight, Arthur was inspired by Tyson's intensity and wanted to become a boxing star too. In 1999, Arthur and his brothers returned to Armenia for military service. After 2002, all the brothers had finished their military service and returned to Germany in 2003. Arthur has a fiancé in Armenia.

Abraham plans on opening a boxing school in Armenia following his future retirement. He will also have foreign language classes for students at the boxing school, such as English and German. "If a boxer knows no foreign language, he cannot have success internationally," Abraham noted.Abraham boxed as an amateur in Bamberg and later in Nuremberg. He was an International Junior Welterweight German Champion in 1997 and a three time Senior Light Middleweight Armenian Champion in 2000, 2001 and 2002. His final amateur record was 81-3-6 (48 KO). In 2003, Arthur and Alexander competed alongside promoter and manager Wilfried Sauerland and his head coach Ulli Wegner. Arthur was a sparring partner for IBF and WBA Super Middleweight Champion Sven Ottke, whom was in the preparations of a title defense. Wegner was so impressed that he began to train Arthur personally. Abraham started his professional career on August 16, 2003, being promoted by HyeFighters. Sauerland-promoted Abraham had many impressive early victories. He defeated Canadian southpaw Ian Gardner (18–1) for the vacant WBAInter-Continental Middleweight title, Hector Velazco (former WBO Champion) and contender Nader Hamdan (36–1). In July 2005, Abraham defended his WBA Inter-Continental title against the highly regarded Briton Howard Eastman. Eastman had previously only lost to American William Joppy and former Undisputed Middleweight Champion Bernard Hopkins.

On 10 December 2005, in Leipzig, Germany, Abraham won the vacant IBF Middleweight title against Kingsley Ikeke by a 5th round knock-out. The IBF belt had previously been vacated by undisputed champion Jermain Taylor after a bout with Abraham was denied in October that year. Abraham defended his title on 5 March 2006 with a unanimous decision against Australian Shannan Taylor. Two months later, Abraham won a second title defense against Kofi Jantuah, also on points. On 23 September 2006, Abraham won a decision against undefeated contender Edison Miranda despite having his jaw broken in two places in round four. Miranda took advantage of this by fighting dirty. Miranda was docked five points for landing repeated low blows as well as intentionally headbutting Abraham. However, even without the five points deducted, Abraham would have still won the fight (final result: 114:109, 115:109, 116:109). Abraham's jaw was operated on the night after the fight. He had 22 screws inserted into two titanium plates. After the Miranda bout, Arthur was praised for his ability to finish the fight despite his injury. Abraham defeated Canadian Sébastien Demers by KO in the third round after two minutes and fifty-seven seconds. Abraham was clearly physically superior than his opponent. Arthur won his fifth title defense by defeating fellow ArmenianKhoren Gevor by 11th round knockout from a powerful left hook. On 8 December 2007, Abraham defeated Wayne Elcock to make his sixth title defense by technical knockout in the 5th round.

During two of his matches, Arthur Abraham was accompanied by live performances of the Scorpions and is currently accompanied by the track "Ready For The Fight" by The Young Punx. On 29 March 2008, Abraham defeated American Elvin Ayala via 12th round KO after connecting with a devastating left hook that sent his opponent crashing to the canvas face first. This was Abraham's 7th successful title defence. On 21 June 2008, the fight took place at a catchweight of 166 lbs. Abraham's IBF Middleweight title was not on the line. Abraham immediately backed Miranda up with hard right jabs before backing off himself behind a high, tight guard. A Miranda right hand landed off the gloves of Abraham as he came out more measured than he had the first time around. Abraham set in to work the body but a stray shot brought a low blow warning from the referee. Miranda made the fight throughout the second round as Abraham did little in the way of punching. Thudding body shots landed on Abraham, but Miranda could get little past the gloves upstairs. A low blow landed from Miranda in the final thirty seconds that brought a brief halt to the action; Abraham calmly caught his breath before returning to his defensive posture. Abraham waved Miranda forward after another barrage of shots bounced off his gloves before landing two body shots and a hard right hand for his best work of the bout. Miranda drew a warning for holding and hitting before another right hand from Abraham buckled his knees. Abraham stepped back rather than following up, choosing to maintain a methodical game plan. The game plan was sound. In the first minute of the fourth round, a perfectly timed right hand-left hook sent Miranda to the floor. Miranda rose, clearly hurt, and this time Abraham would not fail to press the advantage. Another left hook would drop Miranda along the ropes and Miranda would again rise but his legs were clearly gone and the end was at hand. Abraham would land a final striking right hand for the round's third knockdown as the referee leapt in to halt the action before Miranda could attempt to rise again.

On 8 November 2008, "King Arthur" Abraham (28–0, 22 KOs), 28, defeated Raúl Márquez (41–4–1, 29 KOs), 37, by a 6th round technical knockout, at the Bamberg's Jako Arena, the 8th defense of his IBF Middleweight boxing title. He retained his IBF title on 14 March 2009 against Lajuan Simon, his first fight over 12 rounds since his legendary battle against Edison Miranda. The 10th and last defense of his middlweight title took place in Berlin against Turkish-German boxer Mahir Oral. Abraham won this fight by a 10th round technical knockout. Oral's coach threw in the towel after several knockdowns. After failing to secure a match-up with WBO and WBC Champion Kelly Pavlik or WBA Champion Felix Sturm, Arthur announced that he would change his weight class to compete at super middleweight. Abraham participated in the Super Six World Boxing Classic tournament for the WBA and WBC Super Middleweight titles. Fellow participants were: WBA Champion Mikkel Kessler, WBC Champion Carl Froch, Andre Dirrell, Andre Ward and Jermain Taylor.

In his first match of the tournament, Abraham faced Jermain Taylor in 17 October 2009. Arthur was previously supposed to fight Taylor for the undisputed middleweight title, but the fight fell through. Abraham defeated Taylor via a devastating knockout in the 12th round. Taylor was hospitalized with a severe concussion, suffering short term memory loss, unable to remember details of this bout. Taylor was replaced with veteran Allan Green in the tournament. After being released from the hospital, Taylor released a statement saying that he's doing just fine and wanted to congratulate Abraham on his victory and wish him well in the tournament. Former Heavyweight Champion Mike Tyson was in attendance and was impressed by Abraham's intensity and determination. As of the end of 2009, The Ring has ranked Abraham as the 14th best boxer in the world. On 5 March 2010, Abraham was ranked #8 in the world by Yahoo! Sports. On 27 March 2010, Arthur lost his next fight by disqualification due to hitting Andre Dirrell after he slipped in the 11th round. At the point of the disqualification, the scores were 97–92, 98–91 and 97–92 all in favor of Dirrell. However, Abraham was coming back in the last couple of rounds and could have potentially still won by knockout. Also, various observers of the fight, including former Light Heavyweight Champion Henry Maske and fellow Super Six participants Mikkel Kessler and Allan Green, felt Dirrell exaggerated his reaction after getting hit. On 27 November 2010, Abraham lost to Carl Froch in his third fight of the tournament, which was also for the vacant WBC Super Middleweight title. Abraham was dominated from start to finish, losing by a unanimous decision. The scores given by the judges were 119–109, 120–108 and 120–108, which reflected the one-sided nature of the bout.

Abraham qualified for the semifinals, having one win out of three fights. But first, Arthur had a pre-fight with Croatiancontender Stjepan Božić. Abraham won by technical knockout in the second round due to an injury in Božić's hand. On 14 May 2011, Abraham faced undefeated American Andre Ward in the Super Six semifinals for the WBA Super Middleweight title. Abraham lost by unanimous decision. Ward went on to defeat Froch in the finals and won the Super Six World Boxing Classic tournament. On 25 August 2012, Abraham won a twelve round unanimous decision over Robert Stieglitz to capture the WBO Super Middleweight Championship in a spectacular battle which made Abraham a two-division champion. Abraham became the second Armenian and the first German to win championships in two different divisions. The judges' scores were 116-112, 116-112 and 115-113. The bout took place in O2 World Arena, Berlin, Germany. Abraham was named best boxer of Germany in 2012 by BoxSport magazine. His coach Ulli Wegner was also named the best coach of the year.

Abraham defended his title against Mehdi Bouadla on December 15, 2012. He won via technical knockout in the eighth round. A rematch with Stieglitz took place on March 23, 2013 in Stieglitz's home of Magdeburg, Sachsen-Anhalt, Germany. Abraham's eye rapidly swelled shut in the second round and he could soon no longer see. The referee waved him off at the start of the fourth round, resulting in his defeat. A rubber match with Stieglitz took place on March 1, 2014, with the WBO Super Middleweight title on the line once again. Abraham won the fight by split decision.