The Kardashians presented estate near Yerevan 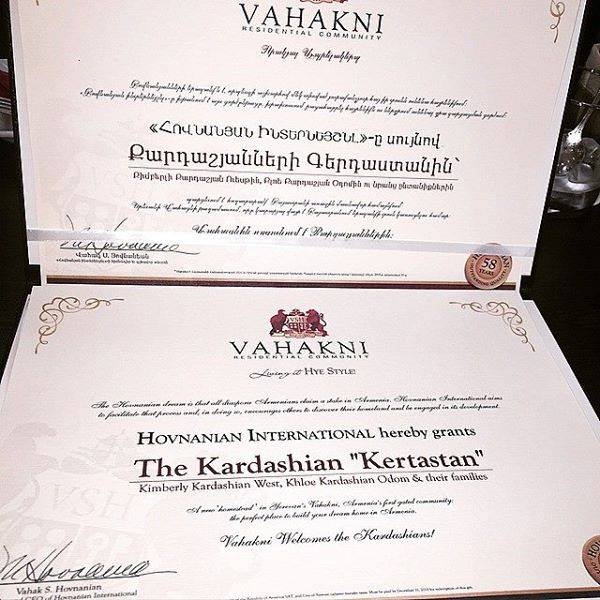 
YEREVAN, APRIL 10, ARMENPRESS. The Hovnanian International LLC has granted a land to the Kardashian family in Vahakni residential community nearby Yerevan. As reports “Armenpress”, Khloe Kardashian made a post on this on Facebook and shared the photo of the certificate with the following note: “Kourt and Rob we got you a souvenir!!!!!! Land in Armenia!!!”

Previously it was reported that on the first day of their visit to Armenia, Kim and Khloe Kardashian toured in Armenia’s capital Yerevan. As reports “Armenpress”, the Kardashians visited “Mother Armenia” memorial, took a walk in Cascade complex and finished their tour in a restaurant in Yerevan. They also managed to meet with some of their Armenian fans and take photos with them.

Famous Armenian American TV star, model and actress Kim Kardashian and Kanye West arrived in Armenia with their daughter on April 8. As Armenpress’s correspondent reported from Zvartnots International Airport, at the airport, they were greeted with salt and bread. Despite the several questions from journalists, the reality show star just said that “she was very happy to be in Armenia”. After that, she sat in a car and headed towards a hotel.

The Kardashians have arrived in their historic homeland to commemorate the Centennial of the Armenian Genocide perpetrated in the Ottoman Empire in 1915.

At the airport, they were greeted by Deputy Minister of Economy of the Republic of Armenia Sergey Avetisyan and Chairman of the National Competitiveness Foundation Arman Khachaturyan.

Earlier, The Daily Mail had reported that Armenian American lawyer Robert Kardashian, father of Kim,Kourtney and Khloe Kardashians, is of Armenian descent. So, the trip to Yerevan is an important trip for the family of stars. As The Daily Mail reports, Kim Kardashian has put extensions in her hair and has returned to her natural hair color especially for the trip to Armenia. In Armenia the family will shoot one of the parts of the show “Keeping Up With the Kardashians”.