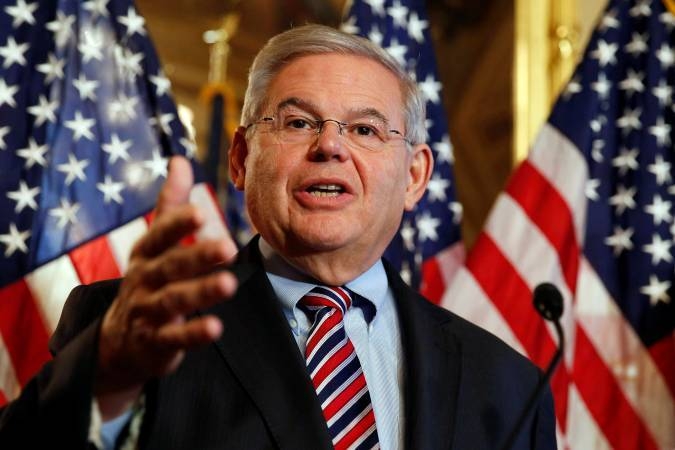 YEREVAN, APRIL 2, ARMENPRESS: U.S. Democratic Senator Robert Menendez of New Jersey was indicted on corruption charges, allegations that the high-ranking lawmaker said he would address at a news conference on Wednesday night, Armenpress reports, citing Reuters.
Menendez was indicted by a grand jury in New Jersey for accepting gifts from Salomon Melgen, a Florida ophthalmologist, in exchange for using the power of his Senate office to benefit Melgen's financial and personal interests, according to the court filing.
The allegations against Menendez, a senior lawmaker on foreign policy and banking, raise the possibility of Republicans gaining a 55th Senate seat to strengthen their hand in policy fights with Democratic President Barack Obama, should the senator decide to resign his seat.
Menendez was stepping down as ranking member, or top Democrat, on the U.S. Senate Foreign Relations committee, Senate aides said.
Menendez and Melgen, both 61, were charged with one count of conspiracy, one count of violating the travel act, eight counts of bribery and three counts of honest services fraud. Menendez was also charged with one count of making false statements.
Menendez, in response to previous reports of a federal investigation, has denied wrongdoing. Melgen and his representative could not immediately be reached for comment on the charges.
The Justice Department said Mendendez accepted up to $1 million worth of lavish gifts and campaign contributions from Melgen in exchange for using the power of his Senate office to influence the outcome of Medicare billing disputes worth tens of millions of dollars to Melgen.
The indictment said Melgen improperly gave Menendez flights on private jets, use of a Caribbean villa, a stay at a luxury hotel in Paris and tens of thousands of dollars to a legal defense fund. Between 2007 and 2012, Menendez never disclosed any of the reportable gifts that he received from Melgen and withheld the information from his Senate staff, the indictment said.
Menendez, a Cuban-American, is one of the most prominent Hispanic politicians in the United States. His office said in a statement that he will speak at a news conference in Newark, New Jersey at 7 p.m. (2300 GMT).
Political science professor Matthew Hale at Seton Hall University in New Jersey said, “It is important to remember that Senator Menendez grew up in the rough and tumble rink of North Jersey politics ... He knows how to fight and I suspect he will fight these charges."
Menendez was re-elected to a second term in the Senate in 2012. He spent 13 years in the U.S. House of Representatives.
"As we have said before, we believe all of the senator's actions have been appropriate and lawful, and the facts will ultimately confirm that," Tricia Enright, Menendez's communications director, said on March 6, responding to early reports that federal prosecutors were close to bringing charges.
The New Jersey Democratic State Committee issued a statement of support from several politicians, including Menendez's fellow New Jersey Senator Corey Booker.
Photo by Reuters