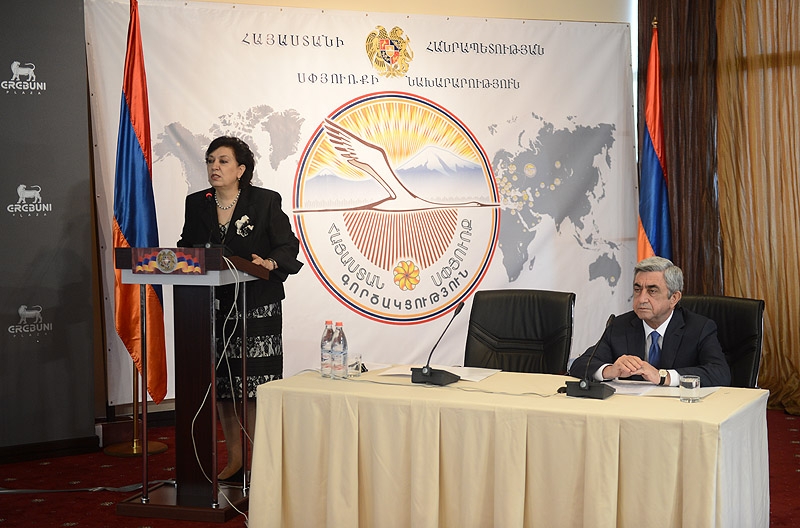 
YEREVAN, OCTOBER 11, ARMENPRESS. On October 11, the President of the Republic of Armenia Serzh Sargsyan pad a visit to the Ministry of Diaspora of the Republic of Armenia and participated in the event summing up the results of the Ministry’s five-year activity. The Mass Media and Public Relations Department of the President's Office informed "Armenpress" that previously the President toured in the Ministry, got acquainted with the working conditions of the staff's departments, and had a conversation with the employees of the Ministry regarding the ongoing activities and future plans. Also, President Serzh Sargsyan visited the introducing the Ministry's activity during the past 5 years.

The President of the Republic of Armenia Serzh Sargsyan made remarks at the event and congratulated the participants on the occasion of the anniversary of the Ministry's establishment. Also, the President touched upon the challenges the Ministry has to face with, its achievements, the structure's mission and the future plans.

Among other things the President of the Republic of Armenia Serzh Sargsyan underscored: "The Ministry of Diaspora is not just a successful structure, but also it has become a developing and prospective structure, which is engaged in the solution of the issues involved in the Armenians' agenda. This Ministry links the Diaspora to the Motherland, and strengthens and directs those ties. The 5-year activity of the Ministry proves the expediency of the regulation of our relations with the Diaspora and concentration of the ties with the state."