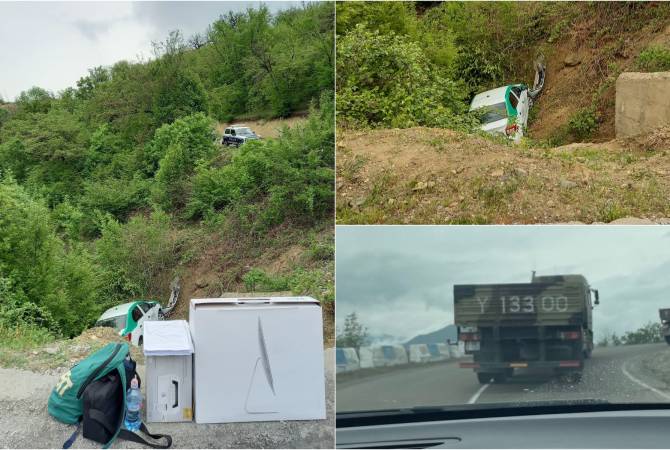 
YEREVAN, MAY 6, ARMENPRESS. The Ombudsman of Artsakh Gegham Stepanyan says all facts show that the Azerbaijani military convoy deliberately rammed into a taxi cab carrying two passengers, which then crashed into a valley.

“On May 5, around 13:00, a cargo vehicle traveling as part of an Azerbaijani convoy at the 24th kilometer of the Martakert-Drmbon road, entered the opposite lane and hit with its trailer a Renault Logan which is registered in Artsakh as a taxi cab, as a result of which the taxi cab crashed 12 meters into the right-side gorge.

There were two passengers in the taxi in addition to the driver. As a result of preliminary examination the passengers did not suffer bodily injuries. Material damages were inflicted upon the taxi service.

Based on the facts collected by the staff of the ombudsman’s office, we can note the following:

Upon seeing the possible collision the Azerbaijani truck could have stopped and avoided the collision, which caused the taxi to crash into the gorge;

After the collision, upon seeing that the taxi has crashed into the gorge, the Azerbaijani convoy did not stop and continued its course;

According to the passengers, as well as the driver himself, the driver of the taxi did everything possible to avoid the collision, but he didn’t have any chance to do so,” Stepanyan said in a statement.

He added that the law enforcement agencies of Artsakh have launched a probe, but at this moment the circumstances suggest that the Azerbaijani convoy deliberately rammed into the taxi cab with apparent intent to inflict harm.