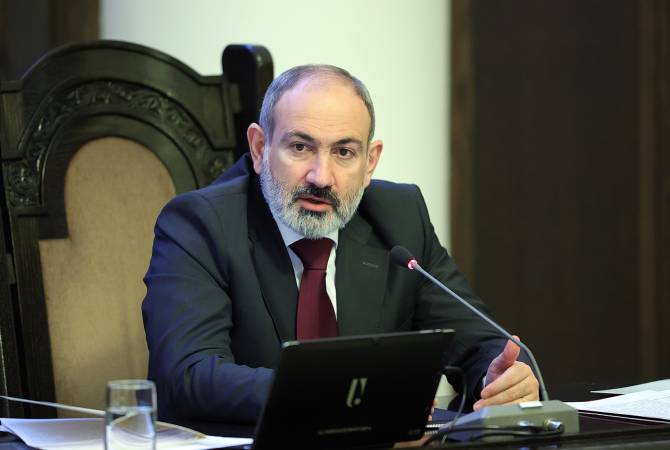 
YEREVAN, APRIL 7, ARMENPRESS. The security guarantees of the people of Nagorno Karabakh, the protection of their rights and freedoms, as well as the clarification of the final status of Nagorno Karabakh are of principled importance for the Armenian side, Prime Minister Nikol Pashinyan said at the Cabinet meeting today. He said these issues are included in the responses of the Armenian side relating to the peace agenda and must become a subject of negotiations.

“Based on the meeting results a decision about two issues was achieved”, he said, presenting the results of his April 6 meeting with Azerbaijani President Ilham Aliyev in Brussels, mediated by the President of the European Council Charles Michel. “Firstly, the foreign ministers of the two countries were tasked to start the preparations for the future peace treaty and initiate talks and contacts on this direction. This means that the principles and matters presented by Armenia and Azerbaijan over the peace treaty must be finalized and must be addressed with the results of negotiations”, the PM said.

He reminded that in response to Azerbaijan’s proposals the Armenian side has stated that there is nothing unacceptable for it in that. “However, they do not complete the matters of the peace agenda. And for us, the security guarantees of the people of Nagorno Karabakh, the protection of their rights and freedoms, as well as the clarification of the final status of Nagorno Karabakh are of principled importance. These issues are involved in our responses relating to the peace agenda and must become a subject of negotiations”, the PM added.

He emphasized that like in the past, now as well the Armenian side considers vital the engagement of the OSCE Minsk Group Co-Chairmanship in this process and stressed that it is necessary to continue working on this direction.

“The next decision made in Brussels was about creating a bilateral commission on Armenia-Azerbaijan border delimitation issues by the end of April. That commission will have a double mandate, the first one relates to the main delimitation works, and the second one is to ensure security and stability along the border. The discussions on this topic, including with Russia’s mediation, are taking place for around a year. And eventually, we came to such a compromise decision. You know that there are Armenian territories that are under the control of Azerbaijan, and there are Azerbaijani territories that are under the control of Armenia. These issues must be solved with the results of negotiations, of course, based on de jure-substantiated records and facts of legal significance”, he said.

He added that the Russian Federation has expressed readiness to assist the delimitation and demarcation works, the European Union is also expressing readiness to assist, and noted that it is necessary to move forward on this direction. “Our position is that there is a de jure border between Armenia and Azerbaijan, and that is the borderline existing in the Soviet times. These border delimitation works must start with this record and it is necessary to try to achieve solutions, and also take measures to ensure security and stability”, the Armenian PM said.

Assessing the Brussels meeting, the Armenian PM said an agreement was reached to move on these two directions, and the further assessment depends on the results to be registered in the practical implementation stage of these agreements. He added that they will continue consistently pushing forward the agenda of opening a peaceful development era for the country and the region. “And we must do the maximum to make this agenda a reality. I repeat that, unfortunately, this doesn’t depend on us only. But we must carry out our part of the work consistently”, he said.