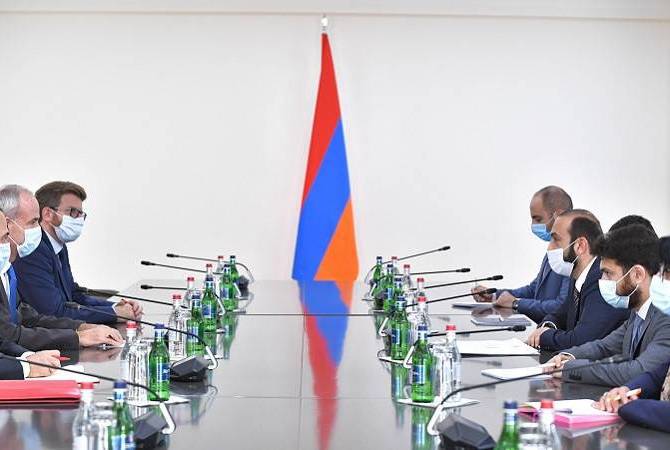 
YEREVAN, OCTOBER 22, ARMENPRESS. Minister of Foreign Affairs of Armenia Ararat Mirzoyan received the delegation led by the Vice President of the International Committee of the Red Cross (ICRC) Gilles Carbonnier, ARMENPRESS was informed from the press servic eof the MFA Armenia.

Highlighting the work done by the ICRC, Ararat Mirzoyan emphasized the organization's uniqueness as a neutral, impartial body that has been active in both Armenia and Artsakh since 1992. The Armenian FM stressed the readiness of the Armenian side to continue supporting the implementation of the ICRC mission in Armenia and Artsakh, in accordance with the three-decade-old agenda.

During the meeting, in the context of providing assistance to the population of Artsakh affected by the Azerbaijani aggression, the activities of the ICRC was stressed as the only international organization present in Artsakh.

Minister Mirzoyan stressed that the issue of immediate return of prisoners of war and civilian hostages remains a priority. In violation of the Geneva Convention and the requirements of the November 9, 2020 declaration, Azerbaijan continues to create artificial obstacles for the return of the captives.

Ararat Mirzoyan also noted that despite the evidence presented by the Armenian side, Azerbaijan hides the real number of captives and places of their detention, which creates serious grounds for assuming that there are cases of forced disappearance.

The ICRC delegation expressed its readiness to continue its assistance to the Armenian authorities in overcoming the humanitarian problems created in the post-war situation.