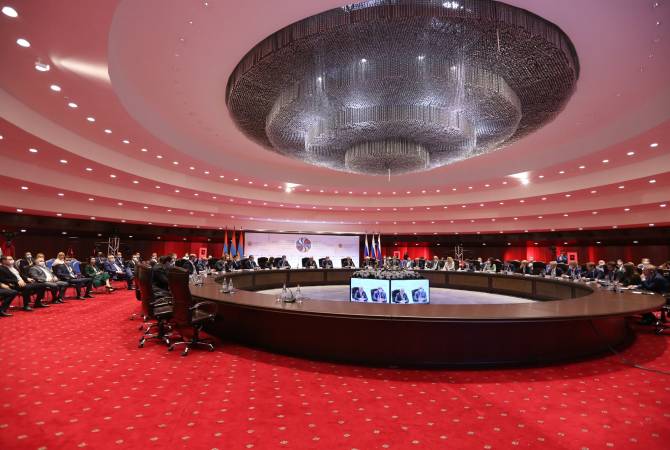 On behalf of the Government of the Republic of Armenia, I would like to welcome all the participants of the 8th Armenian-Russian Interregional Forum.

We are glad to host all our guests from Russia.

Interregional forums have a history of ten years.
They have become one of the important institutions of cooperation within the framework of the allied relations between our two countries. The Armenian-Russian interregional cooperation, which is based on about two dozens of agreements, covers a really wide geography. It includes almost all regions of Armenia and the administrative units located in the most diverse corners of the Russian Federation, including the Oblasts of Leningrad, Orenburg, Yaroslavl, Omsk, Ulyanovsk, Arkhangelsk, Rostov and Vologda. The existence of these ties is one of the bright manifestations of the exceptional relations between our two countries.

The Russian Federation not only plays a key role in maintaining peace and stability in our region, but also plays a central role in our country's economy. Russia is Armenia's leading trade partner.

In 2019, our trade turnover exceeded the threshold of $ 2.0 billion, while this year we have already recorded a double-digit trade growth.

The level of economic cooperation between our countries corresponds to the requirements stemming from the nature of the allied relations, but it does not mean fixing a static situation, on the contrary, it requires constant work, development and improvement.

The world is changing rapidly, and our relations must meet the demands coming from those changes. We need to improve our economic relations so that they contribute to the development of competitive economies in our countries. In the context of what I said, we highlight the further rapprochement and mutual integration of our economies, which should be based on the free movement of goods, services, labor and capital. The Eurasian Economic Union, in turn, serves that strategic goal, and we are interested in strengthening that structure and improving its institutions. The imperative of diversification of our economic ties is also obvious.

In addition to the traditional areas, it is necessary to find ways to further develop cooperation in the fields of high technology, innovation and knowledge-based economic sectors. I am convinced that today's event is one of the tools that best serves the above goals.

I once again greet all the participants of the forum, wishing them effective work for the prosperity of our countries and peoples”, Pashinyan said in his speech.

In his welcoming speech, Russian President Vladimir Putin noted that interregional cooperation plays a very significant role in the development of Russian-Armenian relations, implementation of mutually beneficial projects in economic, social, infrastructural, humanitarian and many other spheres.

Russian Deputy Prime Minister Alexei Overchuk  said in his speech that Russia and Armenia have all the opportunities for sustainable, dynamic development, multilateral cooperation in both trade – economic and humanitarian spheres, as well as for the implementation of large-scale infrastructure projects.

According to him, the interregional cooperation plays an important contribution to that.