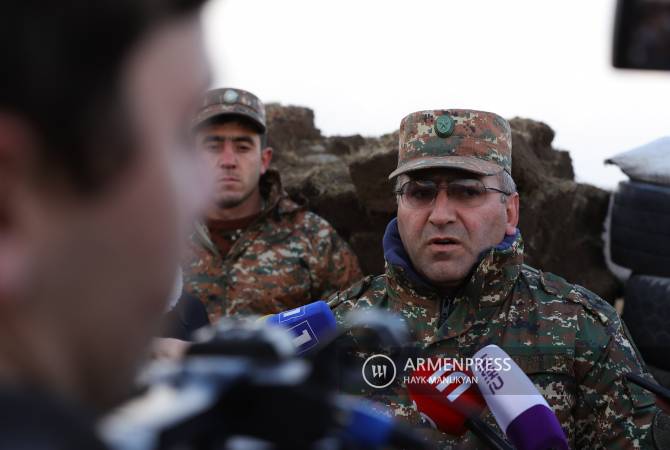 
YEREVAN, OCTOBER 16, ARMENPRESS. The situation at the eastern border of Armenia is peaceful and stable at the moment, and the recent military escalation in the Artsakh-Azerbaijan line of contact where an Azeri attack left 6 Armenian troops wounded did not impact the stability of the Armenia-Azerbaijan state border, Deputy Commander of the 2nd Army Corps of the Armenian Armed Forces Colonel Hayk Petrosyan told reporters at a military post.

Colonel Petrosyan, who is in charge of the military morale of the 2nd Army Corps, stressed that his troops are a combat-ready formation capable of fulfilling any military objective. He said that any adversary provocation will receive adequate assessment from the Armenian military.

“We are now located in one of the military positions of the army corps protection area where border protection is conducted. The combat position is being equipped, it’s already in the final phase, there are observation posts, firing positions where on-duty troops are observing the adversary’s movement with the purpose of assessing and controlling the nature of its potential actions,” Colonel Petrosyan said.

He said that the latest provocation against their positions took place on July 28, when Azerbaijani servicemen attacked a military position near Vardenis, but were repelled.

Nevertheless, he added, despite the post-war military-political situation and significant changes of the line of contact the Azerbaijani military’s conduct hasn’t changed.

“The adversary is the same adversary,” he said. “The 2nd Army Corps, which is deployed at this border, is a combat-ready formation capable of fulfilling any objective. This was proven during the military actions of the 44-day war. Particularly now the army corps is capable of neutralizing any adversary provocation,” the colonel said.

“As a seasoned military expert I can assure you that the adversary is evaluating the military formations and military bases which stand in front of it. If the adversary were to think that they could fulfill some kind of an objective they will definitely go for it. We are not allowing this, we will thwart it with relevant actions,” the colonel said.