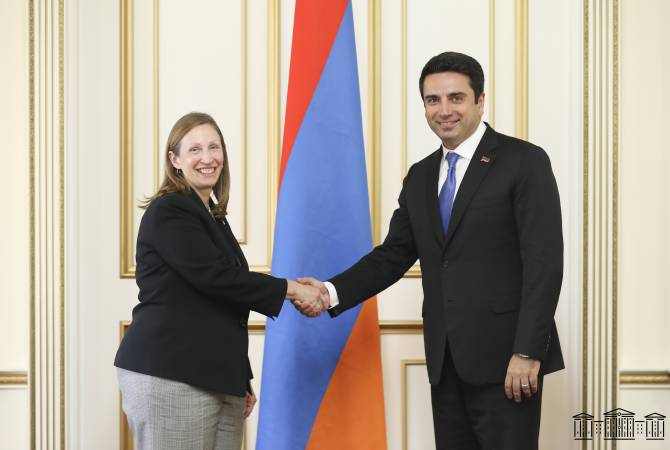 Welcoming the Ambassador, Alen Simonyan noted that since the establishment of democratic relations with the United States Armenia has developed partnership and friendly relations, which includes a large scope of cooperation. He highly appreciated the support shown for many years by the U.S. in strengthening democracy, economic development, reforms being implemented in different spheres. Alen Simonyan stated that the format of the inter-parliamentary cooperation plays an important role in the Armenian-American bilateral relations. He informed the Ambassador that the Armenia-USA Friendship Group will be formed in the National Assembly soon, which is an important link between the cooperation of the legislative bodies of the countries, as well as for the development of inter-state relations.

Regarding the post-war situation, Alen Simonyan emphasized that at this moment the issue of the urgent repatriation of Armenian prisoners of war and civilians being detained in Azerbaijan remains a priority. He underlined that the unconstructive rhetoric of Azerbaijan cannot result in the solution of the Nagorno Karabakh conflict. The conflict should be settled exclusively through dialogue, under the auspices of the OSCE Minsk Group Co-Chairmanship and based on the implementation of the principles developed by the mediatory mission.

Thanking the President of the National Assembly for the reception, the Ambassador noted that the U.S. Administration will continue the close cooperation with the Armenian authorities. During the talk, the collaboration with the legislative body, the development and the strengthening of democratic processes were highlighted. The Ambassador stressed the faithfulness of the U.S. Administration to the implementation of the activities within the framework of the OSCE Minsk Group.

Issues concerning the reforms to be implemented in a number of spheres of bilateral interest were also discussed.