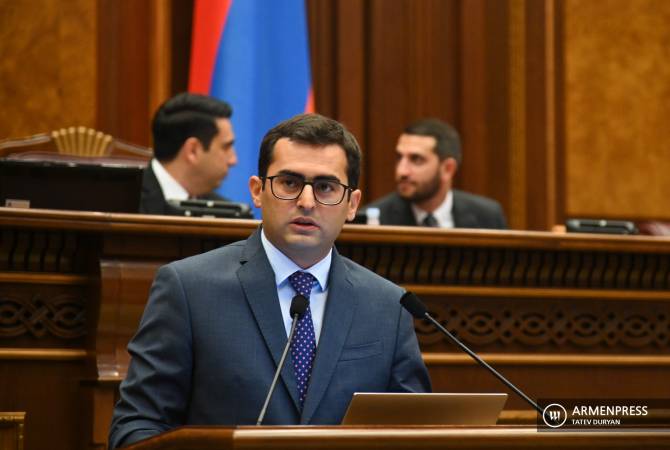 
YEREVAN, AUGUST 4, ARMENPRESS. The unblocking of Armenia and establishing long-term peace are among the priorities of the ruling party, candidate for Deputy Speaker of Parliament Hakob Arshakyan said in his final remarks in parliament before a confirmation vote.

“Very often it seems to us that we are the only country in the world to have enemies, which is at war. And this makes us unique, corners us, makes us cry out for help across the world, blame the world for injustice and inaction, and blame our problems on others,” Arshakyan said.

Reminding that unfortunately Armenia isn’t the only country to go through this, he continued: “One of our main objectives should be that Armenia and the Armenian people are guided not through hate but the interests of the state, not through emotions but through cold judgment, not by placing hope in other countries but by creating the right allied relations, not by seeking domestic traitors and guilty ones but by uniting forces, assessing shortcomings and mistakes so that we don’t ever repeat the same mistakes again.”

Arshakyan added that he would’ve been glad if the defense industry and technologies received funding much earlier in Armenia, noting that he is saying this not to cast blame but to note that lessons must be learned. “When we speak about corruption in the military we are saying it not to blame others but so that no one tries to do it again. When we say – 'stop the conflict and let’s be constructive', we aren’t saying this because we are afraid, we say this because this is in the interests of our state and people,” he said.