EU to allocate over 1.5 billion Euros to Armenia for five major projects 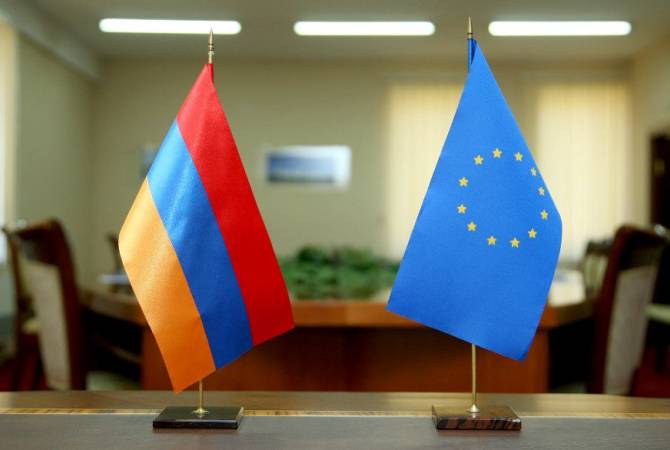 
YEREVAN, JULY 3, ARMENPRESS. The European Union will allocate more than 1.5 billion euros to Armenia in the next 5 years for five key programs, including the development of Syunik region. The document was presented today in Brussels, highlighting the initiatives that the European Commission intends to implement by 2025 in the member states of the “Eastern Partnership”, Massis Post reports.

In a statement released on July 2, the commission said the plan was part of a proposed agenda “focusing on recovery, resilience and reform” that sets specific targets for 2025 with the aim of “increasing trade, growth and jobs, investing in connectivity, strengthening democratic institutions and the rule of law, supporting the green and digital transitions, and promoting fair, gender-equal and inclusive societies.”

The proposed long-term policy objectives are to be discussed at an Eastern Partnership summit planned for December 2021.

The Eastern Partnership was launched in 2009 with the aim of strengthening and deepening the political and economic relations between the EU, its member states, and six countries in the bloc’s so-called “Eastern Neighborhood” — Armenia, Azerbaijan, Belarus, Georgia, Moldova, and Ukraine.

As for Armenia, the European Commission plans to:

-Strengthen the resilience of the southern regions of Armenia.

-Investing in green Yerevan for energy efficiency and the launch of more environmentally friendly buses.

The first pilot project will provide € 500 million in assistance to 30,000 small and medium-sized businesses. “Recovery of the economy after the epidemic is a top priority for Armenia,” the European Commission said, noting that by helping Armenian businessmen, the European Union will help create new jobs, develop and modernize businesses, and sustain Armenia’s long-term socio-economic recovery.

In this regard, according to the document, priority will be given to entrepreneurs who work with nature-saving technologies, especially in the regions, as well as businesses run by women.

The second project envisages supporting the socio-economic development of Armenia, emphasizing that one of the priorities of Armenia’s national agenda is the operation of the North-South corridor, which will provide access to international trade routes and markets.

“Improving transport infrastructure will allow closer ties between the regions, as well as Armenia’s connection with neighboring countries and the European Union,” the European Commission said. “EU investment in this area will focus on the as-yet undeveloped sections of the North-South highway, including the Sisian-Kajaran road.” It is planned to allocate 600 million euros for the implementation of this project, which will be allocated for the construction of a new Sisian-Kajaran tunnel in the south.

The third landmark program provides support for innovative technologies and science. “Armenia has a strong information potential, the sector has grown by about 20% in recent years, but additional support is needed to reveal its full potential,” the European Commission report states. “The EU used to support e-government, but now new investments are needed to expand those services to regional and local levels. In total, up to 300 million euros are planned for this purpose. ”

The fourth direction envisages supporting the strengthening of development  in the southern regions of Armenia. “The Syunik region in particular needs support,” the report said, noting that the region has already had problems due to underdeveloped infrastructure, and has recently been hit by the war and displaced people need education.

“Following progress achieved in  the northern regions of Armenia, the European Union will invest in strengthening the sustainable socio-economic development of Syunik. Priority areas may include housing, infrastructure, tourism, agriculture, education, healthcare, renewable energy, and support for local small and medium-sized businesses. ” For this purpose, it is planned to provide 80 million euros.

The last, fifth direction refers to the capital, particularly the green Yerevan. “Improving the quality of human life and improving air quality in Yerevan requires addressing waste management and energy efficiency,” the European Commission said in the statement, adding that the European Union was ready to invest in a “smart city” package. In this context, it is planned to support the “import of green buses”, which will do less damage to the environment of the capital, will improve and modernize public transport.

The agenda also includes improving the quality of life, including a number of programs aimed at waste management and waste treatment in Yerevan. In total, up to 120 million euros will be allocated for the implementation of these goals.