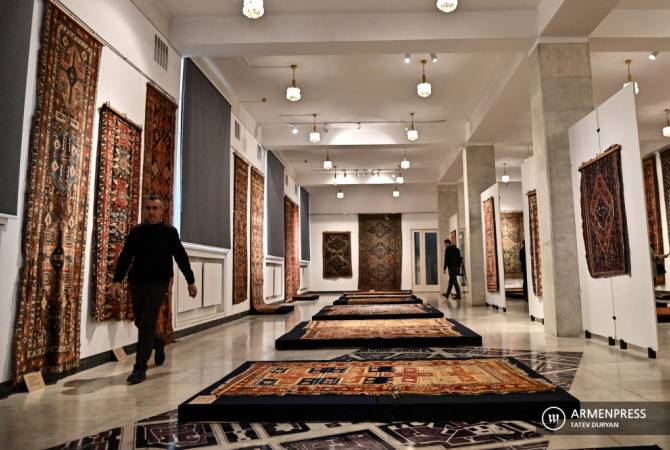 
YEREVAN, FEBRUARY 20, ARMENPRESS. Exhibition of carpets evacuated from the Shushi Carpet Museum during the recent Artsakh War has opened in Yerevan’s National Museum-Institute of Architecture after A. Tamanyan on February 20.

The carpets are from the private collection of founder of the Shushi museum Vardan Astsatryan and have been evacuated from Shushi on November 1, 2020.

“During the war, in late October, a large rocket has exploded near the Shushi carpet museum which has damaged the building, the doors and windows. I had to remove the carpets because there was no alternative. I called Artsakh’s minister of education, science and culture, they provided a vehicle and we evacuated the samples which were presented for exhibition. Nearly 100-120 carpets, which were being kept in the Shushi museum fund, have been left there”, he said.

He said they managed to take out nearly 160 carpet exhibits from Shushi. The oldest one displayed at the Yerevan exhibition is 350 years old from Shosh village of Askeran region.

The exhibition will last at least for three months. He stated that it’s still unclear where the carpets will be kept in the future.

71 carpets are displayed at the exhibition, most of which are from the Artsakh settlements. There are also old carpets from Armenia’s settlements.

The opening ceremony of the exhibition was attended by Artsakh’s minister of education, science, culture and sport Lusine Gharakhanyan, representatives of various museums and artists.