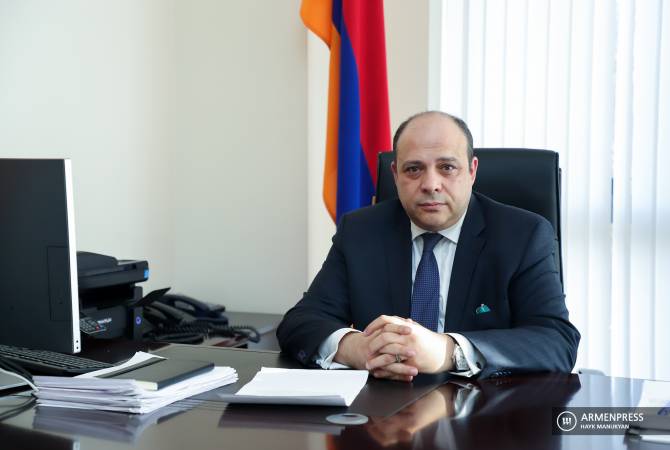 
YEREVAN, FEBRUARY 3, ARMENPRESS. The authorities of Armenia always stand for stability, peace and cooperation in the region, and to this day they are consistent in their steps in that direction. However, for its effective operation, first of all, it is necessary to create an atmosphere of trust, which is clearly lacking among the countries of the region, Deputy Foreign Minister Gagik Ghalachyan said in an interview to ARMENPRESS. The deputy FM also noted that the unblocking of the economic and transport communications can create new opportunities for the economic development and integrity of the whole region.

Question:  For the first time during the post-war period, the Foreign Minister of Armenia had contacts with his colleagues from Iran and Georgia, First of all, how do you assess the results of the meetings, what opportunities will these contacts provide for expanding the framework of the cooperation?

Moreover, major changes and developments which concern the interests of both Armenia and Georgia, are taking place in our region today. In this regard, it is important to have a direct political dialogue between the Ministers and clarify each other’s positions on current events. It is natural that regional developments were among the main topics discussed during the ministerial meeting.

At the same time, in the context of ongoing developments and latest challenges, new opportunities which can contribute to further deepening of the Armenian-Georgian cooperation. may appear as well. This situation begets the necessity to exchange views and outline the joint actions.

I would like to emphasize that the Republic of Armenia has always considered and will continue to consider Georgia as a friendly state, and the development of relations with Georgia is of great importance from the perspective of ensuring peace, security and stability in the region, as the Foreign Minister of Armenia stated during the meeting with his Georgian counterpart. Based on the above, Armenia will continue to make every possible effort to strengthen and develop multifaceted cooperation with Georgia.

The visit of the Foreign Minister of the Islamic Republic of Iran was regional, and the visit to Yerevan was preceded by meetings of Minister Zarif in Baku and Moscow. The Foreign Minister of Iran left Armenia for Tbilisi and Ankara. Indeed, the discussions on the new situation in the region were at the top of the agenda of the visit. 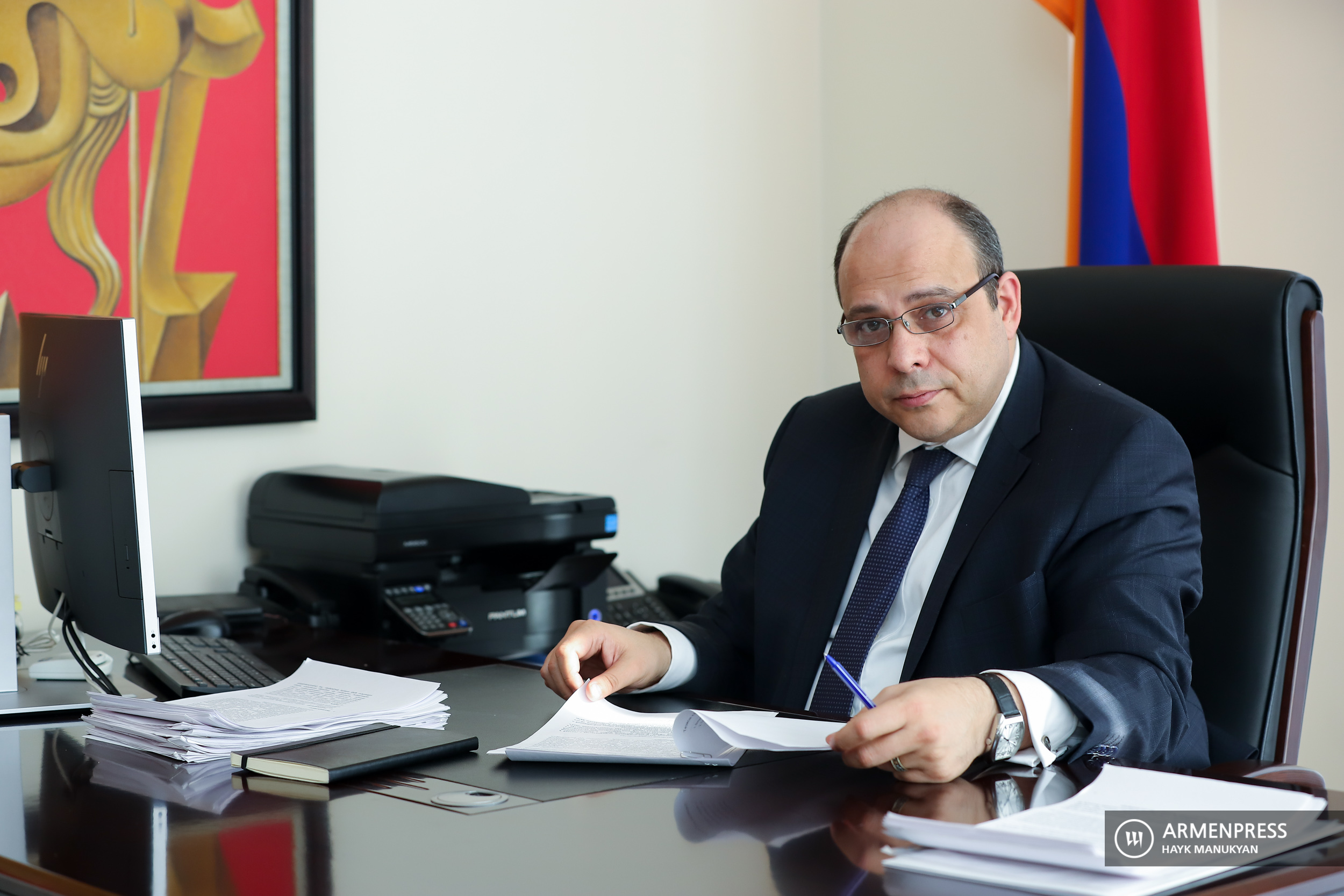 Question: Within this context of the meeting with his Georgian counterpart, the continuation of the work of the Intergovernmental Commission on Economic Cooperation was underlined, and what opportunities do you see for deepening economic cooperation with Georgia? What kind of unemployed opportunities exist in the context of the cooperation between Armenia and Georgia towards which can be further worked?

Answer: The Republic of Armenia emphasizes the importance of developing cooperation with Georgia in every possible sphere, and in this context, the Intergovernmental Commission is an effective platform. In 2019 as a result of the agreement reached with the Georgian side after a long break, we managed to resume the work of the intergovernmental commission on economic cooperation between the Republic of Armenia and Georgia, the previous session of which was held in 2011. Unfortunately, the restrictions resulting from the COVID-19 pandemic prevented the organization of the next 11th meeting of the commission.  Nevertheless, we continue to ensure the continuity of the work of the Armenian-Georgian intergovernmental commission; we hope that during 2021 the situation with the pandemic will let us agree on the dates of the next session with the Georgian side.

Today, in the context of the cooperation between Armenia and Georgia, the spheres of transport, energy, agriculture, tourism etc. have a great perspective. In this regard we can underline, for instance, the negotiations on the construction of the Persian Gulf-Black Sea transport corridor, the construction of a new Armenia-Georgia power transmission line and substation, after the successful completion of which there will be an opportunity to synchronize the energy systems of Russia, Georgia, Armenia and Iran, etc.

We also see great prospects for decentralized cooperation between Armenia and Georgia. In this context, first of all, we consider the establishment of sustainable cooperation between the border communities of the two countries, which will create additional opportunities for the development of these communities.

Meanwhile, I would like to emphasize that in addition to the economic direction, humanitarian issues, particularly, the cooperation in the spheres of education and culture, which are also included in the agenda of the Armenian-Georgian intergovernmental commission, play an important role in the Armenian-Georgian relations.

The high level of interstate relations between the two countries is, first of all, based on close mutual ties, centuries-old friendship and mutual trust between our two peoples. Though, the interactions are quite active today, however, in our opinion they still do not fully reflect the deep historical-cultural ties, the civilizational commonalities that exist between the Armenian and Georgian peoples.

In this regard, we consider it very important to intensify mutual contacts between the residents of Armenia and Georgia, first of all among the youth. At this moment, concrete steps are being discussed with the Georgian side, which should serve to facilitate people-to-people contacts.

Question: How can the unblocking of the region affect the Armenian-Georgian relations?

Answer: It is natural that unblocking the economic and transport communications can create new opportunities for the economic development and integrity of the whole region, which, we think, reflects the interests of both Armenia and Georgia. In addition, in case of unblocking of economic and transport networks, there may be an opportunity to establish transport communication between the Persian Gulf and Black Sea. Naturally, the creation of this network will serve the interests of all the states involved.

Question: During the meeting between the Foreign Ministers of Armenia and Iran, both sides expressed concern over the deployment of foreign terrorist fighters. In this respect the interests of Armenia and Iran coincide, what kind of steps the states may undertake together?

Answer: It is obvious that the presence of terrorist fighters in the region is a serious threat to both Armenia and Iran. This has been repeatedly voiced by high-level officials of the two countries. Unfortunately, Turkey and Azerbaijan does not discriminate between means to advance their aggressive policy and they are consistently undertaking steps to turn our region into a hotbed of terrorism. Indeed, the situation in the region is challenging from the perspective of the security of the two countries and it should be kept in the center of attention. 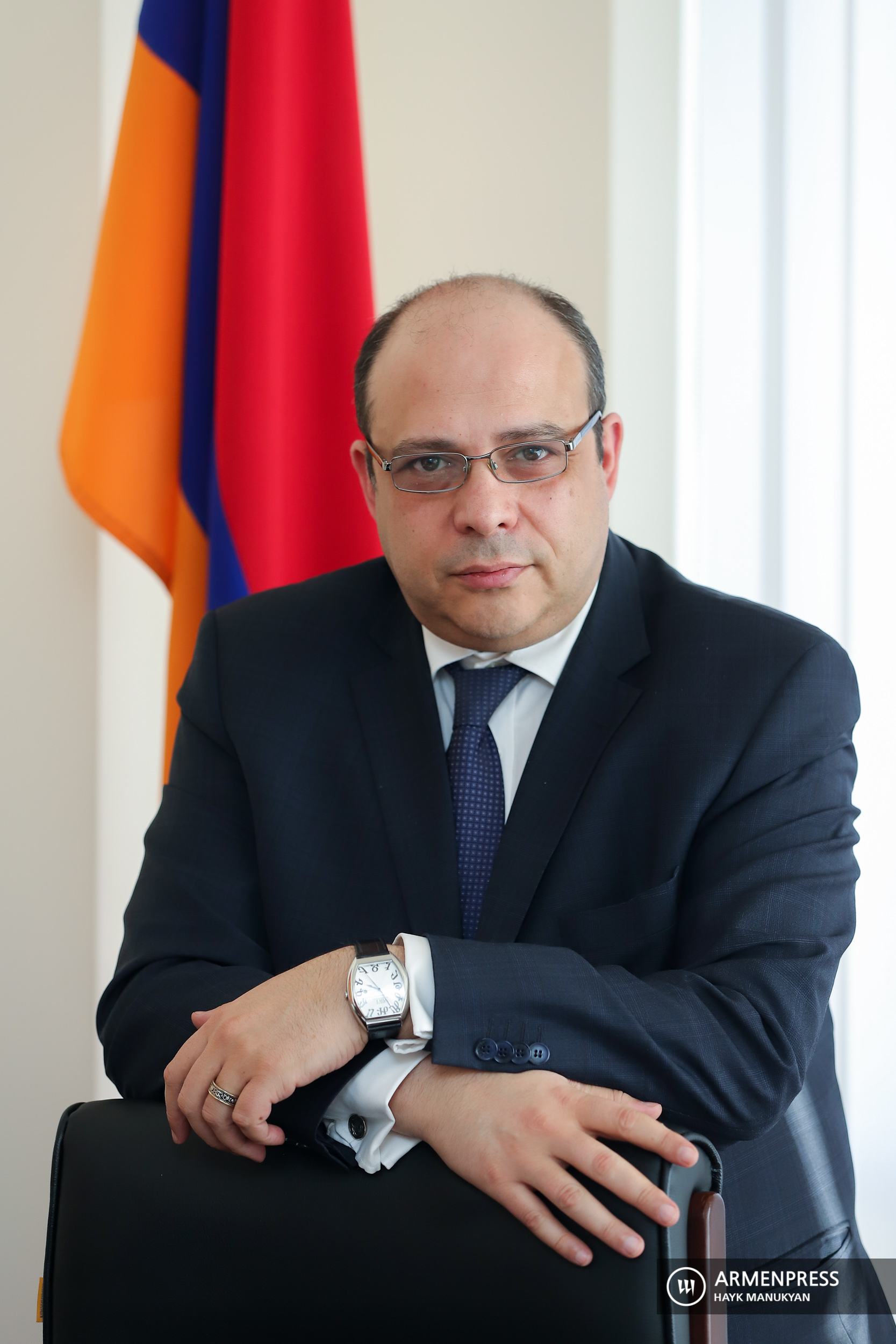 Question: How will the unblocking of the region and the possible operation of the railway affect the Armenian-Iranian relations, will it provide new opportunities?

Answer: Indeed, from the economic perspective the establishment of a railway connection between Armenia and Iran will have a positive impact on the development of trade and economic relations. At the same time, the provision of road transport communication through the territory of the Syunik region and the development of relevant infrastructure is still of strategic importance for Armenia and Iran.

Question: Aliyev announced the possibility of establishing a new multilateral platform for cooperation in the region. What is Armenia's opinion on this, how will it affect relations with neighboring countries?

Answer: The proposal of the President of Azerbaijan to create a new six-party platform in the region was also voiced by the President and the Minister of Foreign Affairs of Turkey. In 2008, Turkey also came up with such an initiative, which did not succeed. One of the reasons is that, both then and now, it is possible to take into account the interests of all states in the region, to maintain the so-called red lines, which have already been announced by some of the states on the platform.

In the "author" countries of that proposal, in Azerbaijan and Turkey, the level of Armenophobia is setting new "records". Dozens of Armenian prisoners of war are still in Azerbaijan; Azerbaijan has occupied the territories of Artsakh, and the destruction of Armenian historical-cultural values continues in Turkey. After all, no diplomatic relations have been established with the two countries.

The authorities of Armenia always stand for stability, peace and cooperation in the region, and to this day they are consistent in their steps in that direction. However, for its effective operation, first of all, it is necessary to create an atmosphere of trust, which is clearly lacking among the countries of the region.

Question: How do you see the further development of the region in conditions of new realities resulting from the war? How does Armenia see its future in relations with friendly countries? In Azerbaijan, Zarif noted that Iran welcomes the restoration of Azerbaijan's territorial integrity, how would you assess these statements by Iran, taking into consideration that the country positions itself as a neutral mediator and promotes regional programs.

Answer: Foreign Minister Zarif expressed his country's approaches to regional issues, but Armenia does not consider that the consequences resulting from the Azerbaijani aggression against Artsakh can be a basis for local peace. As the Foreign Minister of Armenia noted during the meeting with his Iranian counterpart, only lasting peace in the region, which addresses the interests of all, where there are no "winners and losers", can create real guarantees for promoting stability and security in the region.

What refers to the further development of the region in new realities, Armenia's vision is unchanged; it is aimed at deepening and expanding relations with friendly countries, and settling existing conflicts.