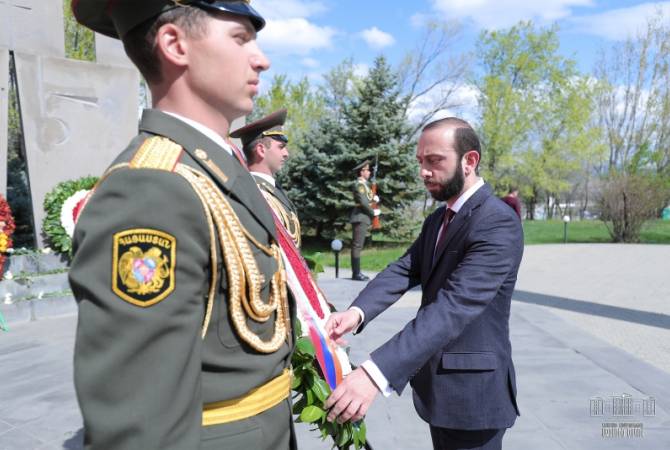 
YEREVAN, APRIL 2, ARMENPRESS. President of the National Assembly of Armenia Arart Mirzoyan and chairman of the parliamentary standing committee on defense and security affairs Andranik Kocharyan visited Erablur Pantheon, where they honored the memory of the victims of the 2016 April war, ARMENPRESS was informed from the press service of the parliament of Armenia.

The war between Artsakh and Azerbaijan named April war or the 4-day war took place in 2016 when the Azerbaijani troops made a sudden large-scale attack against Artsakh. The war lasted 4 days and ended on April 5, when the Chiefs of Staff of the Armed Forces of Armenia and Azerbaijan signed a ceasefire agreement in Moscow. The borderline between Artsakh and Azerbaijan remained nearly  unchanged following the war, but the Azerbaijani troops suffered at least 5-fold more casualties than the Armenian side, estimated at 558. The Azerbaijani troops also committed various war crimes during this period, including a footage of how the Azerbaijani soldiers were showing the decapitated head of an Armenian soldier to a group of villagers and proudly celebrating their “heroic act”.  Some time later the official website of the President of Azerbaijan posted a picture where Ilham Aliyev was awarding the soldier who had committed that act of “heroism”.