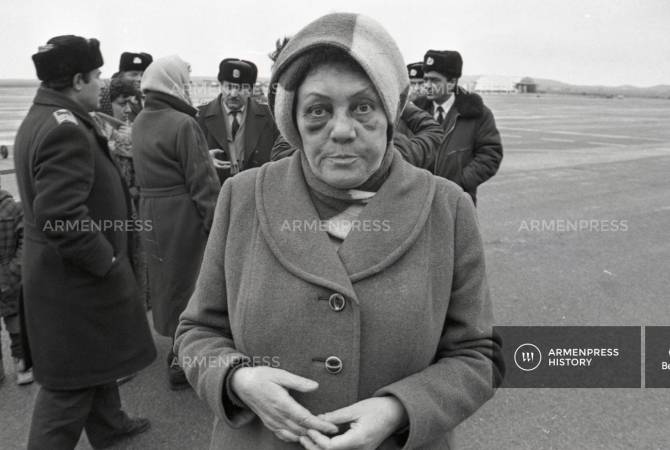 
YEREVAN, JANUARY 13, ARMENPRESS. 115 years ago local Tartars(Tatars), who currently identify themselves as Azerbaijanis, carried out the first deliberate and organised pogroms of Armenians in Baku.

According to several sources at least a few hundreds of Armenians became the victims of the Armenian pogroms in different months of 1905. Not only the ethnic Armenian population of Baku but houses, shops, factories, including oil industry factories owned by Armenians, were targeted by Tartars during the pogroms.

A large number of Armenians were able to confront the mass murders only due to their self-defense. City and governorate authorities of Baku as well as the police not only didn’t intervene in the pogroms but also supported the armed groups of Tartars. The precedent was repeated during the Armenian pogroms in September of 1918 and January of 1990 – the last chord of the forced deportation of Armenians from Baku.

According to British journalist and eyewitness of the events James Dodds Henry, at the time, about 35,000 Armenians were living in Baku, many of whom were engaged in industry and held honorary positions in the municipal council.

Describing the 1905 Armenian pogroms in Baku, Italian historian and diplomat Luigi Villari who was traveling in the Caucasus at the time, says: “But the Armenians, with their superior education, their greater intelligence and push, have acquired an increasing influence in the town and the industry, and have edged the Tartars out of many professions. There are only two small Tartar oil firms, although many Tartars are interested in the business. At Baku, where they are numerically inferior, the Armenians form a majority on the town council, as the law does not allow the non-Christian races to have more than half the seats on local bodies. Even in competition with foreigners the Armenians hold their own, for while their interests on the naphtha industry are only 35 per cent. Of the total, they are represented by five members out of seven on the Soviet Siezd (council of naphtha producers). There are also no Tartars on the Bourse Committee”[1].

Illustration from French “Le Groix Illustre” newspaper from October 29, 1905.
“The land of Oil; Caucasian Tartars slaughtering Armenians”. A copy of this newspaper issue is being kept in the fund of the Armenian Genocide Museum-Institute.

In the first Russian Revolution when the anti-government sentiment dominated the country, Muslims gained more sympathy. The tsarist authorities began to consider Armenians dangerous, and the Tartar population took advantage of it as they did not like the positions Armenians held in Baku.

In his book "Report of 1905 on the revision of the city of Baku and the Baku province", Russian Senator Alexander Kuzminsky, who was sent to the Caucasus by the Tsar's decree to investigate the crimes and pogroms in Baku on the spot, wrote that the reason for the mass murders of Armenians was the murder of a Muslim Aga Rza Babayev, who was allegedly killed "by a shot from the Armenian crowd”.

According to writer and publicist Karen Aghekyan, this was just an excuse to start the mass killings. L. Villari writes in his book that the same Babayev took revenge for his murdered relative Kasum-Bek, who was avenged by the Armenians for committing several acts of violence against Armenian children; girls and boys. But this complicated and not fully disclosed chain of revenge could not in any case be the cause of the Armenian pogroms, but only the formal reason for the Tartars, who have long been waiting for an opportunity to deal with the Armenians for their social and cultural superiority.

According to the results of the examination of Al. Kuzminsky and the report of the Chief of Police of Baku, only on 6-9 February, 1905, overall 232 people (192 Armenians, 36 Tartars and 4 Russians) were killed. 32 Armenians and 5 Tartars were killed in the suburbs of Baku during 7-10 February. The number of Armenians wounded in suburbs exceeded that of Tartars; 23 Armenians and 4 Tartars[2]. It is noteworthy that, unlike the Armenians, in the case of the Tartars, there is no evidence of the murder of old people and children. Almost all information sources mention about killed men who were capable of carrying weapons. Al. Kuzminsky describes in detail how the houses of renowned Armenians in Baku (Ter-Osipov, Ghasabov, Lalaev, Galustov, Aslanov, Adamov, etc.) were looted, and the owners of the houses were killed along with their families[3].

The most striking example of this is the story of Adamoffs(Adamyans) that J.D. Henry’s tells about in his “Baku: An eventful History” book.  He describes the wiping out of Adamoffs as the “most thrilling chapters in the history of massacres”. According to the author, 40 Armenians including elderlies, women and children found shelter in Adamoffs’ house and were either killed or burnt alive in the end. During the self-defense organized by Adamoffs, as mentioned by J.D. Henry, 40 Tartars that surrounded Adamoffs’ apartment, were also killed but unlike Armenians all of them were adult men and held weapons.

A screenshot from J.D. Henry’s “Baku: An eventful history” book.

The author also tells the story of Lalaevs in the same book. For several days the Lalaevs begged the Governor for help through other influential families, but the Governor deigned to appear at the Lalaevs' house only a few days later, finding the house on fire and the corpses of Lalaev, his wife and other victims lying on the street. On the other hand, L. Villari records that M. Nakashidze walked around the streets of the city and encouraged the Tartars who carried out the Armenian pogroms. According to the author, one time he even ordered the police to return the gun taken from one of the Tartar murderers and patted the latter on his shoulder. These facts show that Baku’s police played a special role during the Armenian pogroms in February, August and October, supporting and encouraging the Tartars. According to eyewitness accounts, the police began the march in order to provoke the Tartars to the massacre[4].

As by L. Villari mentions, if Nakashidze wished to prevent the riots, he would have stopped them. The authorities did not respond to desperate calls for help from the Armenians besieged in their homes. Nakashidze said that he had no troops and could do nothing to help, although in fact he had two thousand men at his disposal[5].

Another piece of evidence was published in French “Le Grand Illustre” newspaper’s September 15 issue. Mr. Tatossoff as well as his spouse Marie and daughter Eveline were burnt alive during the merciless atrocities carried out by Tartars.

Source: The Fund of The Armenian Genocide Museum-Institute

February pogroms were followed by pogroms in August and October. At that time, clashes took place in oil industries that were owned by Armenians and where most of the workers were also Armenians. In addition to human losses, the Armenian community of Baku also suffered huge material losses. Unfortunately, comprehensive data on the total number of victims and material losses of the Armenians has not yet been published. In parallel with the pogroms of Armenians in Baku, Tartars carried out the massacres of Armenians in Nakhichevan, Shushi, Yelizavetpol (Gandzak, nowadays Gyanja) and other places.

The pogroms of Armenians in Baku in 1905 and 1906 were the first act of open, large-scale and organized attacks by the Tartars on the Armenian community of Baku. This was followed by 1918 and 1990 Armenian pogroms, where the Armenian population and centuries-old cultural heritage were destroyed with almost the same scenario and with even greater cruelty.

The persecution towards Armenians continues even today. People with Armenian last names are forbidden to enter Azerbaijan. The peaceful Armenian population is still a target for the Azerbaijani armed forces. In April 2016, the Azerbaijani Armed Forces entered the village of Talish, and executing an Armenian family of three elderly people. Their bodies showed signs of torture and abuse; they shot 2 of them to death and then cut off their ears. The same method was common during the Armenian pogroms of 1905 and 1918 by Tartars, and in 1990 by Azerbaijanis who had already adopted the new identity. The international community must condemn these acts of crimes against humanity in order to prevent such tragedies from happening.