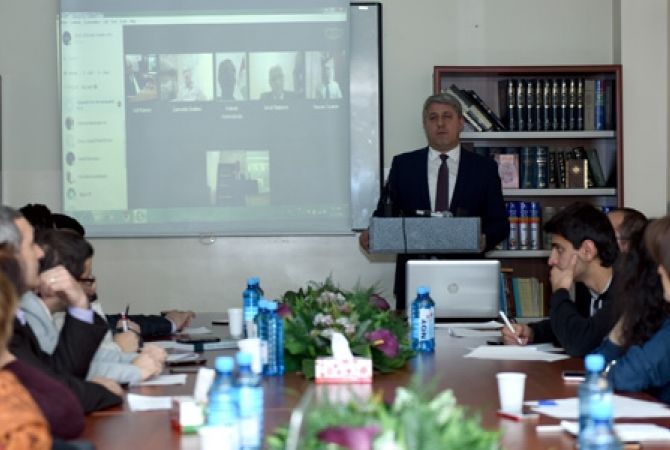 
YEREVAN, DECEMBER 27, ARMENPRESS. Politicians and public figures representing Talysh national minority in Azerbaijan presented the violence carried out against them in Azerbaijan during a round-table discussion headlined “Talysh people: history and modern trends” on December 27. The event was organized by the joint efforts of YSU’s Department of Iranian Studies and the Talysh National Movement with the support of “Voice of Talyshistan” radio. Leader of Talysh national movement Alakram Hummetzode highlighted the dialogue between the Armenian and Talysh peoples. According to him, the two peoples must strengthen the scientific and cultural cooperation and today’s round-table is another step taken for the strengthening of relations. He introduced the main goal of the Talysh national movement: to conduct reforms in Azerbaijan and obtain autonomy.

“The voice of the Talysh people has been heard by numerous countries despite the impediments by Azerbaijani authorities. The number of the supporters of our movement increases day by day. The entire Azerbaijani people has become a hostage in the hands of Azerbaijani leadership”, “Armenpress” reports Alakram Hummetzode saying.

“A genocide is underway there by the use of disseminating different types of diseases. A question arises. Why does the number of the Talysh people decline? It is not a natural phenomenon and they should not think that these acts will remain unanswered. We receive hundreds of letters every day about the situation there. The law enforcement bodies spread narcotics and weapons among the Talysh populations in great quantities”, Shabanov stated.

According to the Chairman of the Committee on the Rights of the Talysh people Zaharaddeen Ibrahim, the entire Azerbaijani people is dissatisfied with the Azerbaijani regime. “They just have no chances to change it since any act to show dissatisfaction, even peaceful protests, are persecuted, people are arrested. I am convinced this clan has to step down. This is merely a matter of time”, Zaharaddeen Ibrahim announced.

According to him, Armenian and Talysh people are the most ancient peoples in the region which had already established relations before the emergence of the Turkish element in the region.