We should kill you until the last one: Genocide of Armenians in Maragha according to eyewitness accounts 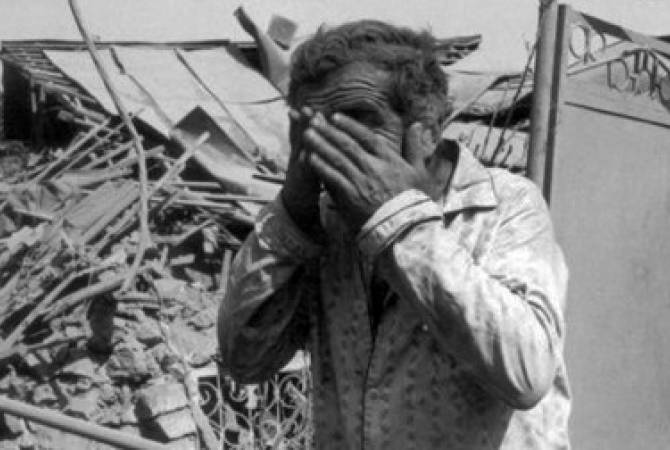 
YEREVAN, APRIL 10, ARMENPRESS.  27 years ago the Defense Ministry Units of Azerbaijan along with the units of the Internal Affairs Ministry and the OMON forces (Special Purpose Police Units of the Ministry of Internal Affairs of Azerbaijan) committed one of the cruelest and inhumane crimes of our time in Maragha village, Martakert, located in the north-east of NKR. On April 10, 1992, they invaded Maragha and within a few hours, destroyed and burned the village down by razing everything to the ground, brutally tortured peaceful civilians to death, burned alive and dismembered them and captured some of them to unknown directions. Caroline Cox, Deputy Speaker of the House of Lords of the UK who arrived in the village after the tragedy, described the Maragha massacre as a “contemporary Golgotha and many times over”.

The testimonies of those who surprisingly survived the massacre leave no doubt, that what happened in Maragha was a Genocide – left unpunished and uncondemned.

Karine Poghosyan and her family also passed through this inhumane crime and cruelty. According to her, the random attacks against the peaceful inhabitants had started after the pogroms of Sumgait: “They were stealing animals from the fields or just catching our drivers and taking their cars. We were always under pressure. We heard different stories about the attacks on the farms or against the vineyard workers which happened over and over. The first victim was in autumn of 1991: a tractor driver was shot and killed during the autumn sowing. The first bombing was in January 1992 after which everyone came down from the second floor to leave in the cellars. In order to avoid getting hurt when the shellings took place we had to cover under the shelters built with sandbags.

Karine, her two infants, father-in-law and neighbors were taken captive to different directions. “My son was then 3-year-old and my daughter was 1 years and 4 months. They grabbed them away from me. I was screaming like mad after it. When we were driven from the village on foot, I saw tortured and slaughtered corpses on the streets: I knew them, as they were our villagers…

Even if someone was trying to escape, they were killing with an ax, were breaking their heads. Well, they were armed. They had axes; one side like a hammer and the other side looked like a sharp thing like an ax.  They were mercilessly hitting everyone they saw.  The village was full of cries and scuffling noises...

“They were swearing at Armenians. They said that we are Armenians and we are haram [indecent]. They looked down on us with hatred, with a feeling of disgust”, Karine Poghosyan tells recalling the massacre of Maragha.

Karine clearly remembers her fellow villager Valya slaughtered on the ground. She has also seen Valya’s husband and her daughter on the sea of blood. “I saw a man slaughtered, next to the gates, I do not know who he was, the blood splatters were on the gates… I was so unconscious at that moment, didn’t feel any pain and maybe my brain did not even work then. I just thought, they would kill me anyway, I wish they killed me soon so I wouldn’t feel anything. There was even a moment I followed them in order to take a gun and kill myself thinking that maybe everything will be finished by that”, she says with tears drowned in her throat.

“There were lot of villagers together with us, not only from our dugout (an underground shelter built by villagers), but also from different parts of the village. On the way I saw them dragging about my father-in-law and an old neighbor of ours. We were together until reaching the center of the village. There was a house, the basement window of which was on the ground. They were thrown among the thorns and weeds: “We must shoot you. Your sons are in that basement. Ask them to come out”. I was taken away and heard a shooting. I turned, looked back and saw them falling on the ground. But later, when our people entered the village they didn’t see any corps there. I do not know whether they were killed or taken away: there is no news about my father-in-law until now.

After taking us away, on the same night and the next morning, they kept everyone together in one place. They were always holding a gun to us and were threatening us… Next day they said that the funeral of their soldiers is going to happen and they should slaughter us on their graves. They didn’t take me and a bride from our village. I do not know, if the boys were taken”, she recalls.

They exchanged Karine and her son but could not find her daughter. After the exchange, they gave the photo and the personal data of her daughter and in a month and a half it turned out that the child was in an orphanage. Later, after one year and 7 months, it was proved that the child in the orphanage was really Karine’s daughter. She was taken on October 23, 1993 when she was 3. “The child didn’t approach me as she didn’t recognize me. The orphanage nurse brought her: she was holding her hand and did not want to leave her. The nurse blamed me for leaving her, maybe she thought that it was me that brought her to the orphanage. I didn’t feel anything then, I thought it will take just a few minutes, I will take my child and leave. However, the child didn’t want to approach me, she was standing close to the nurse and even cried after she left. She wasn’t talking at all and after a few days started to say words in Azerbaijani. Later she gradually got used to us. She was scared: when seeing a soldier or a car she was crying out”, Karine recalls.

Karine Poghosyan did not see any other captives of their group later. “I don’t know whether they slaughtered them on the graves, or they shot them. I don’t know what happened to them. There were both women and children and young boys from the village”.

Karine also lost her sister Zarine Poghosyan during the Maragha massacre. Mother of the Poghosyans, Sveta Poghosyan tells us, that on April 17 her husband went to the exchange of Zarine and her children. On their way back, they exploded and were injured on a landmine. They were taken to hospital in Martakert. Zarine underwent a serious surgery, her toe on the left foot were cut but she died because of a serious injury in her belly. Mrs. Sveta said that Zarine was brutally tortured: “Her breast was fully burnt with cigarette butts and two holes were made on her neck with a knife. I asked her to see where her earrings were, she said they have stolen it tearing her earlobes”, she remembers with tears in her eyes.

According to Human Rights Watch/Helsinki, as a result of the genocidal acts committed by the Armed Forces of Azerbaijan, 50 civilians were killed and 50 were captured from 118 peaceful residents in Maragha. Some of them were later exchanged, whereas the fate of the 19 people from Maragha still remains unknown. The husbands of Karine and Zarine are still missing.

The interview with Karine and Sveta Poghosyans was conducted within the framework of “Simple Genocide: Maragha, April 10, 1992” film. You can find the actual historic footage, eyewitness accounts and other facts on the Maragha.org and Karabakhrecords.info websites.